Cycling greenways and why it might become a habit

I am a utility cyclist. At least, I still like to consider myself as one. I hardly ever cycle "just for fun" or "because the weather is so nice". I cycle when it is the most efficient way of transport.
In fact, that's also why I don't cycle so much anymore. Since two months now I live only 5 min from work (by foot!) and a similar distance from the nearest grocery shop. What initially sounds great also has some side effects. I simply don't get enough exercise. Every day I feel less and less energetic and less efficient at work, but am more tired and more distracted with other things. Cycling from and to work was not just the perfect way of moving my butt, but also a good isolator between work and leisure. I am missing both of these positive effects, but am trying to replace them by something else now.

Radfahren in Wien -- a review of Vienna's new bicycle guide

"Radfahren in Wien" (Cycling in Vienna) is an extensive handbook with a lot of useful information about cycling. Although it is strongly related to Vienna, I can highly recommend it for a general German-speaking audience (in particular, if situated in Austria). This is, because it is an exhausting and wittily written, smart and neatly designed handbook on almost anything you ever wanted to know about cycling.

Bikes in commercial use

One rainy day a couple of weeks back I decided to overcome my shyness and went to the city center pretending to be a tourist. With my tiny pink Asian camera, I took photos of interesting bikes. Here's a few pics taken that day that are concerning commercial use of bikes.

I do all my grocery shopping on foot, because it's easier after work and very close to home. Thus I almost thought that I would not be able to complete the "Carry a load on your bike -- groceries, etc." task of the LGRAB Summer Games.

Well, it so happened that I had to go shopping for other purposes. I'm rather lazy when it comes to housework, and although our new couch is pretty nice it gets dusty quite easily. What to do?

For a while know I was tinkering with the idea of buying a fancy throw-over. Today I finally grabbed my "new look" bike bag and Paula and headed off to the 20th district with a mission.
Read more »
Posted by anna at 7:43 PM 7 comments:

A not so naked bike ride in Vienna

Yesterday, the time has come again. The time of the "bare as you dare" bike ride in Vienna. If you'd like to know the story behind it, you may read my comments and look at some pictures from last year. This year I went there on short notice straight after work. It was rather cold and the weather forecast not too promising. I did not bother to take a bikini with me because it was way too cold for me. Very few people, however, did. Brave. I hope they didn't catch a cold.
Read more »
Posted by anna at 4:41 PM 2 comments:

I must admit, I do own a fancy and also expensive bicycle, but it's not that important. Of course, my Paula is a hell of a nice ride, but for simply getting from A to B I can do with almost anything. For example, I still use my old mountain bike for many trips, especially when the road conditions are not so good. Does one really need many gears and fancy equipment?
Well, all our bikes are nothing compared to bicycles in India. Indian bicycles are very simple. The vast majority is exceedingly old, heavy and single speed. There are no lights nor reflectors installed. The saddle as well as the carrier are huge and seem comfy and stable, respectively. The most beautiful piece of an Indian bicycle is the big shiny bicycle bell. Fantastic! 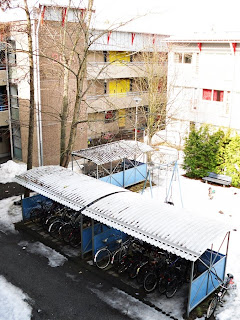 A perfect match for the tiger bike!

A while ago Anna spotted a tiger bike in Vienna. She claimed that it's "the one and only" which is true, but there's another self-made "one and only" in my city! She's often sighted in the city center locked in street lights, trash cans or bike racks. So far I haven't been lucky enough to sight the owner of the bike, but one day I may stay hidden stalking the bike until I spot her ;)

I have difficulties determining the species of this one. It could be a hybrid of feline species such as tiger and leopard. If you have a theory, please let us know! So here it is: let me present the Safari Bike! 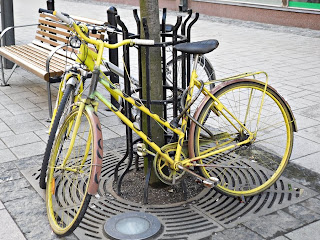 This is my friend Alberto crossing a street in Vietnam. He told me that there are about 90% scooters in the modal split there, and that people even take them into shops etc. The noise level is very similar to Indian cities, however, there are already more cars in those places.

In Vienna, many streets have traffic lights. So crossing a street as a pedestrian (and often also cyclist) is done by the following procedure:

You're a poor guy/girl and have to cross once more? Too unfortunate. You'll have to wait again, because there are hardly any "diagonal" traffic lights. I don't know how there are called technically, but I mean those where you can use cross diagonally because all the vehicular traffic has a red light. In Austria (and most other European countries I know, apart from Ireland) motorists have green at the same time as pedestrians and cyclists on, e.g., a parallel segregated bike path. Of course, car drivers have to yield those, but sometimes there are dangerous situations, especially on bike paths that are somehow visually detached from the road. Be aware!

Many times on small roads I find that the traffic lights are not necessary because a) there is not much car traffic in the first place and b) pedestrians have green when most of the car traffic has too, anyhow.

In Vienna, there are a lot of traffic lights for cyclists. The seperate ones are pretty neat, as long as they are not "on demand" lights (it takes ages for them to turn green, and especially when I wear thick gloves in the winter, they are not so easy to use).

Two "on demand" traffic lights for cyclists in the 3rd district
However, most of the time cyclists' lights are included in the pedestrians' ones. This is a big disadvantage, because cyclists are much faster than pedestrians, and we could do with a much shorter clearing phase and hence a longer green phase (cyclists are actually much closer to "normal" traffic than to pedestrians). Especially on the Gürtel bike path, cyclists have a huge disadvantage due to these joint lights as well as due to turning cars -- we just miss the progressive signals at almost every junction, i.e. on average every 50-200 m. By the way, this is called "Grüne Welle" (green wave) in German. I like that term, but I would like it even more if it would refer to bike rather than car traffic.

You're right, today is not Sunday. But hey, I took these pictures on Sunday, so I hope it still counts. In fact, I even saw the motif on Saturday on my way to the grocery shop...

What? Well, a bicycle!
Nothing special, you say, you see bicycles every day?
Well, not this one!

This one is special because it is personalized. Here I present you the one and only tiger bike.