Different views on cycling in Europe

So far I haven't actually introduced myself, anna (notice the small "a" in the beginning), as all the essential information about me is listed in my profile. Why am I writing this blog? Well, simply because I enjoy cycling and want to share my experiences and observations about cycling (in particular in Vienna, Austria) with others and hopefully convince more people that the bicycle is an ideal means of transport -- especially in urban areas but also outside if spatial planning is done intelligently. I want to spread and share the spirit of cycling, but also point out what good/bad bicycle infrastructure can do (or not do).

In the beginning I was on my own. Later maff from Linz (3rd largest city in Austria and currently European capital of culture) joined in and wrote a few posts too. He's involved in a bicycle advocacy group and an enthusiastic rider himself. Besides he is also interested in road cycling, a somewhat unusual combination. Although none of us owns a car, maff is the only one who doesn't even hold a driver's license.

A few days ago I had the idea to ask my friend Anna from Barcelona, Spain, whether she would like to write a little bit about her cycling experiences too. I know her from a student exchange program in 2001. Anna started cycling last year, but doesn't have an own bicycle yet. I think I infected her with the "bicycle virus" and now it seems that she can't get rid of it anymore. She already writes a blog about Catalonia which is definitely worth reading. 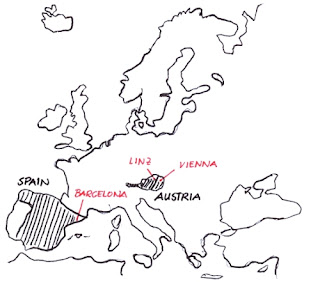 With their approx. 27 km/year cycling distance per person, Spanish people are at the very bottom of the table in Europe (even in the USA it is 33 km/year). Austrians cycle about 173 km/year on average -- where I originally come from it's around 406 km/year, in Vienna only 117 km/year. Still nothing compared to the nearly 1000 km/year in the Netherlands and Denmark (numbers are from 2006, published by the EC -- I found them in an Austrian newspaper).

Although Spain is far off the European middle level, recently many things have changed there and it seems that they really try to get people onto bikes. I'm sure Anna can tell more about it and I'm already looking forward to that.

Well, we are two Annas now, but it should not be difficult to distinguish who wrote what since we are geographically separated. The other Anna will also sign as "Anna from BCN" or so. Stay tuned.

---
UPDATE
Since September 2009 also Sonja from Turku, Finland, is on board. Read more about her views and ambitions in her introduction.
Posted by anna at 11:22 AM

Email ThisBlogThis!Share to TwitterShare to FacebookShare to Pinterest
Labels: numbers

Planting the seeds and watching them grow. Keep at it.

it's a wonderful blog. Vienna has 12% modal share for bikes, which is very respectable in the big picture. Salzburg should be at about 20%. Still, work to be done. Keep up the good blogging.

Thanks for your motivation. Unfortunately, Vienna doesn't have 12% cyclists - only 4.1% (2006). But Graz and Innsbruck have ~12%. Salzburg is obviously our prototype. I think one main difference there is that the mayor himself cycles around ;-).

Most Americans I know never ride a bike, so that 33KM a year number (as small as it is) must be heavily skewed by people like me riding thousands.

Anyway, I look forward to hearing from both a(A)nnas :)

Hi. Kudos for the blog. The more good cycling blogs, the better.

I live in Madrid. I have to say there's a long way to go here, beyond increasing the average km on bicycle per person. First, there's a great deal of cultural change needed here amongst drivers and motorcyclists. Drivers here are often pretty agressive.

Then there's the political support for cycling. On the national and regional level, it's very weak. On the local, it depends. Barcelona is way ahead of Madrid in this regard. Overall, though, local support is pretty weak.

I'm hoping the EU will help by pushing some mandatory standards that will force towns to face up to cycling as a serious transportation alternative but it'll take time.

Miguel, you're right cycling practice in Barcelona has changed a lot. I live there since 2002 and I can tell that since BiCiNg appeared in 2007 there are more and more cyclists. Good because that means that hopefully they'll build more lanes. Bad because no one behave properly (neither cylist nor drivers nor pedestrians).

Look forward to reading more about cycling life from the 3 of you.