Why the heck am I riding a mountain bike?

Well, this is just a rhetorical question. Of course I know the answer. But it's probably not so obvious to other people since I nowadays only commute in the city and a mountain bike actually isn't the right mode of transport for that. And that's also one of the reasons why I think about buying another bike, a proper city bike..

My bike doesn't have a name. I have it for more than 12 years and it never had one. By now it's already like a part of me (or the other way round), like in "The third policeman" by Flann O'Brien as Maff would say. So if I would have to name my bike I would just call it "Anna's bike" or even just "Anna". Ok, it's not so cool as others have great names for their bikes like Elisa M's Mick Jagger or Dottie's Smurfette, but I can live with it. Maybe I will name my next bike.

Twelve years ago I was still a teenager. Till the age of fourteen I commuted to grammar school with my old and very heavy city bike and a ~10kg schoolbag in my rear bike basket. And all that on a ~8km round-trip with a long and steep hill in the middle. It was quite hard, but I enjoyed it a lot cause running to the school bus and squeezing into that (there really was a lot of squeezing involved - once a schoolmate of mine was jammed in the back door for quite a while until the driver realized it) wasn't very relaxing. Cycling -- even on a federal road without bike path -- was a lot of fun. Especially since a few girls of us rode together.

Ok, why a mountain bike? The city bike was just crap. I hated it because it was so heavy and I had to work so hard to get up that hill. And I wanted to be cool which in the 90s meant that I needed a mountain bike. At that time aluminium frames became popular, but they were still thick and ugly so that I decided to buy a steel-framed bike, namely a red Kästle Degree. It was my first (and only) adult bike and I had to pay half of it from my own pocket money. Unlike contemporary mountain bikes mine only has a short suspension fork in the front and no disc brakes. Of course I had to buy all the additional stuff extra (lights, reflectors, fenders, bell, stand). I still don't have a rear rack, but I could attach one to it if I wanted to. As I started to attend a secondary technical college ~25km away I stopped cycling to school anyway and commuted by train. I mainly used my bike to meet up with friends or for recreational rides. And since I did a lot of off-road biking at the time, a mountain bike was actual the perfect choice. 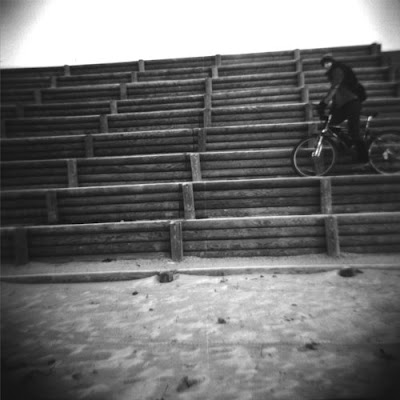 Myself and my bike at the Danube Island

When I moved to Vienna I took my bike with me. In the beginning I had everything within walking distance so I didn't use it regularly, but e.g. on the weekends for some trips to the Danube Island (a very popular recreational area in Vienna). It was in 2005 when I moved to a flat further outside and started to ride my bike every day to get to the university. Of course as a student I used to hold a cheap public transport ticket, but the trams were slow and no fun. Nowadays I also do my shopping by bike, and it would sometimes be useful to have a rear rack. Other than that I'm quite happy to have a mountain bike in the winter as I have a much better grip on the snow with the fat tires. They are also practical if I can't avoid the horrible cobbled pavement in the city center.
The last time I used my bike for real mountain biking was in the previous summer in Switzerland. There are quite some mountain bike tracks in and around Vienna too, and I might try some of them this year. But besides that I already think about my new city bike (that yet has to be found). One bike isn't enough to meet all demands anyway :-).
Posted by anna at 9:34 AM

I think you should put the mountain bike in storage for 30 years. It'll be a collectors item. People will say "what's a mountain bike?' ;)

Interesting to hear about how cycling has been a part of your life since you were a kid. I rode a bike or walked to my elementary school a mile away, but it would have been too dangerous to bike the busy and narrow roads to my junior and senior high schools.

I'm with you about public transit - I hate squeezing onto trains and buses, although if I can manage to get a seat on the train and am in a good mood, the trip could serve as an insider's tour of the city (since the train is elevated above ground).

About a new bike, maybe you could transform your steel mountain bike frame to a city bike, like the blogger at Totcyle did - http://totcycle.com/blog/queer-eye-for-the-mountain-bike-guy.html

for a start you could use slick or semi-slick tires during the summer (and save the coarse studded all terrain tires for the next winter).

I think dottie and maff may have a good solution for you, especially since you bike is steel. I have a Gary Fisher from the late 90's that I have made into more of a commuter bike. Then, depending on space, get another bike. I love having more than one bike.

Very funny about the 90's and mountain bikes. So true!

This is really a marvelous link Dottie, thanks a lot! Although I have already pimped up my bike a little bit, that is really a way to go. Hm, but I also like the idea of having two bikes. I think I will just do both, pimp up mine and buy another one ;-). There's only the problem, that there is no room to store bikes in our house. I will have to come up with a solution for that first..

I think you need two bikes for sure. :) But as others have said, you can always convert a mountain bike into more of a commuter, like I did with Pinkie.

I have two bikes. A "HYPER WAVE" and a "Roadmaster MNT Sport". Being a grandfather I fear the bar on the "Guys" bikes so I go UNI-SEX, O.K.,, girls bikes... I find the hardtail bike best for road. I has 26 x 1.75 road tires. Smooth quiet bike. I ride about 100 miles a month on this bike and it's 2 months old. I did a lot of tuning up in the beginning on both bikes. Cheap bikes can be good bikes if tuned up correctly. I have about 300 dollars in both bikes and they ride well and shift well..I rode 15.4 miles in 88 minutes tonight. If you get a road bike remember, small tires can be dangerous. I think a 26 x 1 3/8 tire is good all around size for road bikes and 26x 1.75 for MNT commuters..The 26 x 1 3/8 tire WON'T fit a MNT bike wheel..Bike tires are sized from tread to tread. MNT wheels are smaller than Road bike tires to account for the taller tires..

Thank you so much for this article! I am new to the biking community, and this post has given me much more consolidated insight than any other resource I've found.