Yesterday I moved to the 9th district. I hate moving. Of course, it's nice to live in my own apartment (and in a house with a big bike room :-)) rather than just a room in a shared apartment, but this putting-things-into-boxes and clearing everything is just a pain. I organized a moving service (2 strong guys and a truck) who did all the hard work of carrying my stuff, so at least that was very easy and relaxing for me. Earlier, when I had less crap, I used to move by (my friend's) car and public transport. But once one has to transport a lot of furniture, moving by car is too much of a pain. And by no means cheaper than just renting a service for 2-3 hours (ok, that depends on the distance, they usually charge 1 €/km for people who move countries).
Lately I read an article on derStandard.at about a few people who have established a moving service by cargo bicycles. They charge 25 € per half hour and transport up to 100 kg per bike. That's much more than I paid for a truck and two guys, who I reckon are also much faster. Thus they can't really do it commercially yet, but I like the idea as such. You should definitely have a look at the pictures (just click on the one I linked :-)). 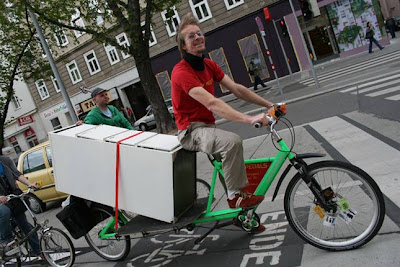 www.heavypedals.at
By the way, one can win "them" for the 15th of May. So in case you are planning to move within Vienna soon, have a look at their website www.heavypedals.at. Unfortunately I had to be out by Friday, but I would have loved to see them in action ;-).
Posted by anna at 7:41 AM 5 comments:

After being back from India (see posts from Nagpur, Delhi and Jaipur) and its stressful traffic, I do appreciate the peaceful and almost empty streets in Vienna. Everything seems so organized and easy.

Gürtel bike path in Vienna
Read more »
Posted by anna at 11:29 AM 2 comments:

One of the last places I've seen in India was Jaipur. It was a real treat after the stressful time in Delhi. Although there was a huge crowd of taxi drivers waiting and hassling me at the train station, the city itself was very relaxing.

Do you remember having certain bikes in fashion at certain times? To me it looks like bikes have now fallen to the same pit fall of fashion fluxes as everything else. You know, fashion is a way to keep the market economy growing: you have to buy new stuff all the time when the old goes out, even if it's still usable. Although, if you are smart, you can trick the system – it goes in circles! Those bikes that were in fashion decades ago are the hottest thing right now :) So ask your mom or uncle if they have “vintage” bikes, and you'll have the hottest bike in the neighborhood.

Was there a time before bike trends? I never noticed them until the 2000's. I thought that a bike is a bike is a bike. When it's got 21 gears, it's a fancy bike. However, now judging by the variety of so many different retro bikes, other people must have thought differently. Anyways, the first trend that I remember started from a music video. I don't remember what the band was or when it was shot. It must have been in the beginning of the last decade. It was a retro music video. A bunch of boys were riding their cruiser bikes on a hot summer road. The next summer cruisers were everywhere, and apparently they did come to stay, because they are still everywhere. 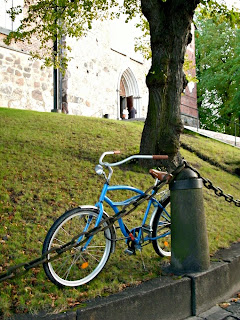 To be honest, I did not like Delhi. It's a stressful, noisy, overpopulated and dirty city. The whole place is covered in a thick pall of smog. The streets are filled with mostly men, and a lot of them are shamelessly staring at women. Not a pleasant place to be.
Maybe my bad experience is also connected to our arrival. One of the first things that happened -- even before we reached the hotel -- was a taxi breakdown in the middle of a busy street. It was hot, dirty and uncomfy. And it seemed to take forever to get out of this straining situation.