Why are only losers riding a bicycle?

Well, obviously I don't talk about real life. It's about stereotypes though.

For example, in many movies (especially American mainstream movies) it's generally the warm-hearted loser that rides a bicycle. The bicycle there stands for low intelligence, no money and not being able to manage one's life. The successful business guy drives a big SUV, has a huge house in the suburbs and a beautiful wife. And yes, it's guys. Women are mostly just by-products. 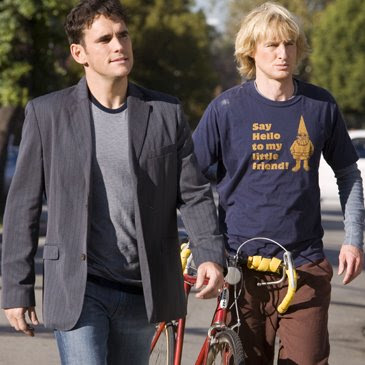 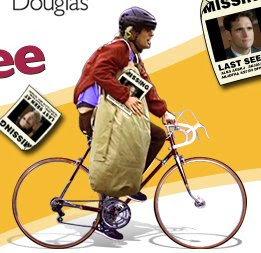 Owen Wilson in "You, Me and Dupree"

Ok, this is also cliché and certainly not true for all movies including bicycles. But it's symptomatic and many people absorb these clichés automatically without even trying to get to the bottom of it. Is it that what keeps them from riding a bicycle? I think it's at least part of the truth.

---
UPDATE
I just found a blog that deals with exactly this subject -- the bicycle in popular culture. Interesting, how other people draw similar conclusions. Well, form an opinion yourself and let me know what you think.

By the way, a similar concept is used in "The 40 Year-Old Virgin" staring Steve Carell. There's even the line "Everybody rides a bicycle ... until they are 6 years old".
Posted by anna at 9:58 PM

This is the Car Centric Culture of the USA,The Propaganda of the Motor Manufacturers and to a very Lesser Extent over here in Europe.,

The Successful Businessman with the Beautiful Wife Big House and Big SUV Ends up with Obesity Problems and Diabetes and also his Wife,and cant Pay the Mortgage because His Business has gone Broke .

The Cyclist on the other Hand remains Fit and Healthy and also his Wife or Girlfriend because She likes Cycling as well. Becaue he does not Own Expensive Motor Cars he is not broke and has Paid off anything He owes and still has plenty of Dosh left over.

He lives in a Nice Little House closer to Town because it is easier to Commute to and Plenty of Shops and the Schools are closer , so his Children can Cycle in Peace without being bothered by Noisy Polluting Traffic. He has Embraced the good Life and actually gone back in time when not many Cars were on the Road, when everybody had not much Money and had to Depend on the Bicycle to get around.

He is not Ashamed by this Philosophy of his on Life, he is not worried by the Sniggering of all the Yuppies who are now all mostly Broke anyway and in Danger of losing their Suvs and Houses and also their Wives.

Very soon the Flash Geezers who owned the big Cars and Houses and who had high Maintenance Wives and Girlfriends are reduced to Renting a Shoddy small little Flat and Riding around on a Bicycle .
The other Chap is actually Richer than Him now and he looks on Enviously at him with his little House and his Happy Contented Wife and Children and the Happy Brood are all Riding around on Bicycles.

She Rides a Bike said...

I was thinking on this very topic yesterday, then I seemed to recall that the always dashing and handsome Gene Kelly road a bike in Singing in the Rain. Frankly, the high powered businessman in the big SUV has never appealed to me. Vulgar displays of wealth are, well, simply that. I prefer the life described by le homme au velo to the chase to see who dies with the most toys. And I do think this is largely an American phenomenon, which I hope the rest of the world will increasingly reject. I must say it was interesting to be traveling in Europe in the wake of Hurricane Katrina and to hear people of all nationalities question why their governments were embrasing American-style free markets and privitazation when for all our perceived wealth we clearly couldn't even take care of our own.

most of the people i see riding bikes fall into two categorizes: 20 something losers who aren't successful, and middle age lance armstrong wannabes.

Thanks for the tips.