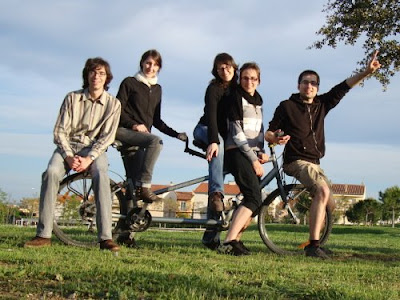 This already happened last month but it was a new funny experience. Anna paid me a surprise visit for my 25th birthday. And we spend my birthday's day doing something none of the both of us had ever done before: riding a tandem a friend of my sister lent us. I must say it was one memorable birthday!

It all began the night before, when we got to my hometown, Vilafant (near Figueres, north-east Spain, 20 km from France). During supper we talked about a picture of two men on a tandem I had posted in this blog some time before. We said it would be nice to try one. And my sister told us she might get one. And we got the tandem!

It is not as difficult as I thought before: the one in front has the whole control, the one behind only needs to keep pace. The most complicated part, at least for me, was beginning to ride. It is then when synchronizing with the other rider is essential to avoid falling. Balance also plays its role as well. If the back rider does not start at the same time as the front one, then the bike moves a lot. However, once you are pedaling things get much smoother and you really enjoy it.

The only danger I see is tandeming with a faster rider than you in the front. Or with a brother who is delighted at the thought of becoming a bit crazy and riding so fast than you cannot keep pace with him and you have to stop pedaling if you appreciate your unbroken feet (just exaggerating and kidding).

anna and Anna riding a tandem around Vilafant
anna from Vienna:

It was really a lot of fun. With some practice, I guess, two people can go pretty fast on a tandem. But as Anna already said -- the one in the front is in control of everything and some confidence is needed ;-). Wouldn't mind to have a tandem in a shed to be able to go for a ride with friends.

The advantage of a tandem is also that the second person doesn't need that much of an experience riding in traffic. Therefore it could be very useful for families, old and disabled people.

Anna's whole family enjoying the tandem
Posted by Anna at 7:32 AM

Great pictures! That sounds like a fun way to spend a birthday. What kind of tandem did you ride?

Btw, I must have a photo of the roundabout somewhere, too!