Today I finally got a second-hand carrier for my bike (maff had a spare one). Immediately I bought one of these cool expanders that I once saw in the Netherlands. Not many bikes have them here, but they are really practical. The next investment (apart from a new urban bike) will probably be one of those cool Basil Mirte shopper bike bags. Well, I also had a look for a new bike, but today I saw nothing eye-catching. 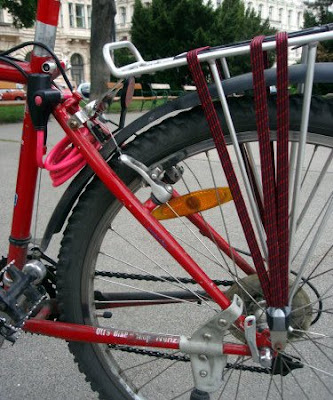 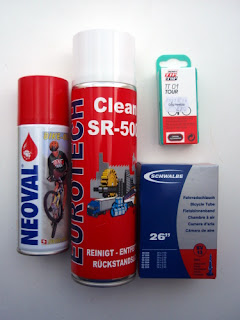 1. my bike with the new carrier 2. other stuff I bought (bike oil, cleaning spray, repair kit, inner tube) 3. Basil Mirte bag
I also bought the Falter (an Austrian weekly newspaper) cause their top story is "The future of the automobile -- about the deep crisis of a former status symbol". The main article can be read online here (in German). It also contains some interesting information about how the USA lost their public railway system by e.g. replacing trams by buses (that's what they say happened in Los Angeles massively). Apparently not everybody in the USA believes the story around Bradford Snell's report and some people simply call it a conspiracy theory. Well, I'm not really an expert on that, but I tend to believe what the Falter says cause it's a very serious newspaper. But they also claim that cars probably would also have ruled the world without GM destroying the public transport system in the USA. What do you know about it?

But well, it also happened in Europe that many tram lines were closed in the first half of the last century and are only rebuilt now, e.g. in Dublin, Barcelona and many other major cities. Unfortunately, it takes much longer for good things to come back then it took to destroy them. But at least they come back :-). 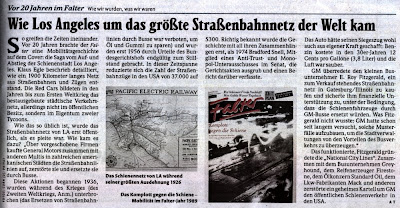 That Falter article about cars was very interesting, but it did not mention bicycles. Maybe you would like to point out to them that half of all car journeys in the EU are shorter than 5 km, which takes 15-20 minutes by bicycle. Perhaps you can find the exact number for Austria by looking up the national cycling organisation.