Are you a bike punk?

What actually is a bike punk?
A punk that bikes? Is that all? Is it about anarchy on the road? I don't think so. Is it a guy/girl that rides a fixie with spoke cards and that plays bike polo on the weekends? Far too stereotypical (e.g. mountain and road bikes are also commonly used), but getting close I suppose.. 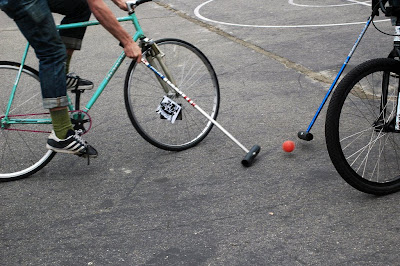 "hard court bike polo" by "kitty meets goat"
Do you have to (re)build your bike yourself to be part of the crowd? I guess that helps as it's also about creativity and spending little money. Are only bike couriers allowed? And what about clothing? Punk-like clothing I'd say. But is that all? Or is it not that at all?

How to be a bike punk?
Yes, there is even a funny How-to on the internet! So let's see what I fulfill:
Hm, I don't own a fixie though, and I yet don't have any cards in my spokes (but a sticker on my top tube that says "one less car" -- does that count?). I also never played bike polo. Therefore I wouldn't consider myself as bike punk. But all of that is not mentioned in the how-to anyway. So maybe I am a bike punk sensu lato ;-). What about you?

Well, honestly, who really gives a shit? Whatever you are, cycle on! 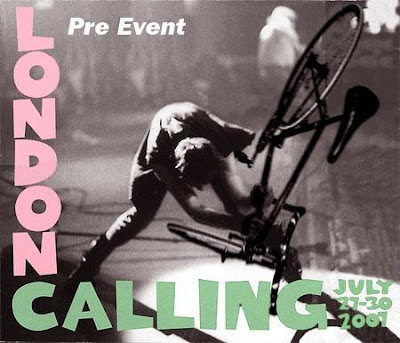 I found that cool redo of the Clash cover on the Three Basics blog
Posted by anna at 7:54 AM

right on with the bike polo!

That's funny. I fit all the criteria, too, but I'm definitely not a bike punk. Bike punks are a distinct tribe in Chicago, often found on fixed gears with tight jeans and no helmets. Oh, I'm also way too old, at 27, to be a proper bike punk.

Bike Punk???
Sounds like just another pigeon hole!
Or maybe a fashion label
Anarchy is a political/philosophical view point.
I guess I'm a punk that rides a bike not a bike punk:)

Nothing to do with 3 basics

Don't be fooled by the date in the website, it is for this year:)

I'm a punk who is also a cyclist but not in the "fixie rider" context; I do a lot of road riding (trying to get sponsored onto a professional team)

I believe that, this is extremely individual and predominantly intellectual. Also bike punks can be even ride across the country too.
custom bicycle stickers

Thanks for taking the time to discuss this, I feel strongly about it and love learning more on this topic. If possible, as you gain expertise, would you mind updating your blog with extra information? It is extremely helpful for me. good cycling form

Wow, cool post. I'd like to write like this too - taking time and real hard work to make a great article... but I put things off too much and never seem to get started. Thanks though. how far is a triathlon