The temperature rises and every day I see more and more cyclists out and about. And every day I discover tons of bike-related topics to write about ;-). Where to start today? Maybe last things first..

On my way home from university I met my flatmate. She wanted to buy some beer for her party this weekend, but the nearest shop was already sold out (they had a cheap offer). So she asked me where the next one is and whether I would help her carry some. As I had to buy some milk anyway, that wasn't really a long way round for me.

Each of us carried 24 cans (à la 0.5l) of Ottakringer beer. Although we are both skinny girls that's peanuts. I guess we could have carried even more, especially on the downhill part, but our bikes weren't set up for that. Still, I'm quite happy with my new carrier and the expanders ;-). 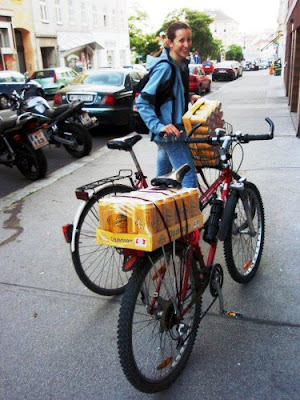 Today's beer transport
By the way, did I ever tell you about the German term Radler? It has two different meanings: 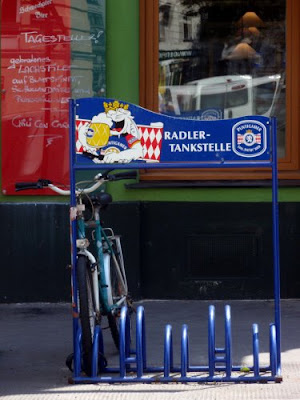 Radler filling station ;-)
Whether you like beer or Radler or not -- I wish you a nice evening. Prost!
Posted by anna at 8:35 PM