In Vienna there are many guys on bikes, but unfortunately most of them are rather unfashionable. Well, there are also exceptions. Here are some: 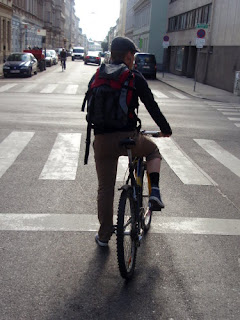 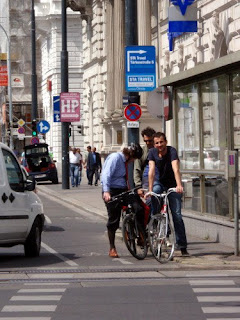 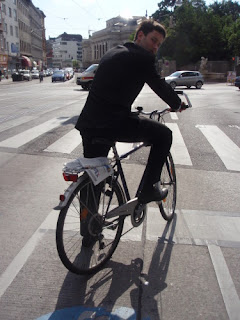 Left: guy with cool hat, Middle: guy in suit and newspaper on the carrier (very rare), Right: not so fashionable guys, but ok
Who wouldn't want to wait behind them at a red light? ;-)

Sadly, I have say that most of these guys here didn't respect some traffic laws. Except the one in the left picture they all don't mind riding in the wrong direction of one-way bike paths/lanes. The men in the right picture even directly waited on the arrow pointing in the opposite direction (although I have to admit, that the only other option to get from that point to the other side of the ring road is to carry the bike down and up the stairs of a pedestrian underpass).
Posted by anna at 12:52 PM

Oh, male cyclists in Vienna look so much better than in the US! Here are some pretty snazzy men around Neubaugasse and Volkstheater.