Puch was an Austrian company located in Graz, Styria. Since 1889 they produced bicycles, scooters, motorbikes and cars. One of their most famous products was the Puch Maxi scooter. They had to shut down in the late 1980s due to financial problems. The name has been sold several times afterwards. That's why you can still get Puch bicycles, but there is no connection to the old ones whatsoever - so I don't know if their quality is still as good.

I just know the old bicycles. My mum owns a Puch Cavette, and my dad a Puch Clubman. Both have this nice metallic blue color that I like so much. By now the bikes are more than 20 years old. My mum stores hers at the attic (it's a little bit broken and she never got it fixed). My dad still uses his Clubman although some parts are not original anymore, e.g. the shift levers and the saddle. I quite liked to ride the Clubman cause it has a dropped bar and small tires, but still fenders, a (rear) rack and all other essential parts of a city bike. The gear levers are (as usual for old bikes) mounted to the down tube.

As I mentioned in the previous post, there is also a Puch Clubman parked in front of the university building where I usually park my bike. It has been there for months now with a flat rear tire. But all the rest of it looks quite ok since the parking space is canopied. It's not in such a bad condition as other abandoned bikes that spent the winter outside. Well, it is a little bit rusty too of course.. I want that bike! Well, I can't steel it and I'm not a person who would ever think about doing this. But it is a pain to see it every day knowing that nobody uses it anymore and I still can't have it. I think I will leave a note there next week, asking whether the owner would sell it to me. But unfortunately it's not very likely that s/he turns up there ever again.. 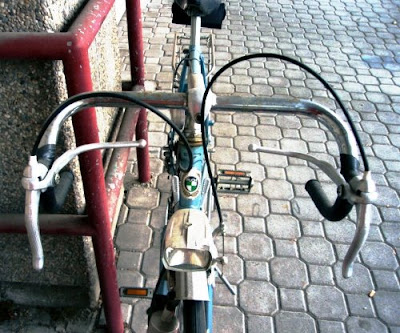 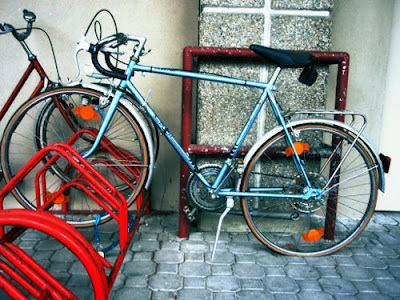 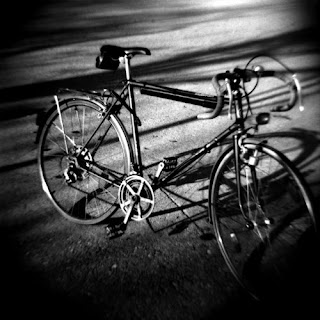 The left and right pictures show the Puch Clubman in front of the university, the middle one is my dad's.
Posted by anna at 7:00 PM

Take the bike!!! A great thing to do is taking the bike and letting a platic protected note were it used to be parked!

The bike is better between your legs than abandoned on the street!

It is not stealing if you take it, repear it and use it. Plus, if you let a note the former owner could call you back!

Last advice, write a small note so that only a person who would be looking for his bike would find it. And do not mension the colour of the bike... Just to check if it's the real owner.

If you still want a Puch Clubman, i can get you one.