Last week I attended a workshop in Innsbruck, Tyrol. Innsbruck is a real mountain town in the alps. It is named after the river Inn and a bridge (Bruck means Brücke in the Tyrolian dialect and bridge in English). It is situated in a nice valley and surrounded by very high mountains. Innsbruck is 574m above the Adriatic sea and has ~120.000 inhabitants (~200.000 in the agglomeration). Many tourists go there for skiing in the winter.

Coming back to my first question, what's different in Innsbruck? Well, firstly it is much colder than in Vienna. Last week the temperatures went down to -15°C (even below -20°C in some other parts of Tyrol). And whenever it wasn't freezing, it snowed heavily.

Still, there were incredibly many people around cycling. Within 5min I could see more cyclists in Innsbruck than I usually see in Vienna within a whole day (ok, I usually don't spend all day cycling around, but still). Nobody would say that cycling in the winter is impossible or just something for weirdos. Many people cycle in the winter in Innsbruck. They probably wouldn't even think about leaving their bikes at home if the temperatures are far below -10°C and if there are a few decimeters of fresh snow on the roads. The latter actually even was the case when I was there, as I already mentioned. 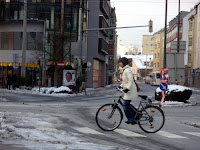 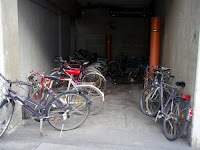 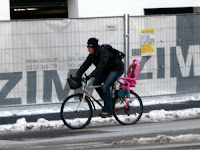 In my opinion, cycling in Innsbruck isn't more or less dangerous than in Vienna. In fact, there are hardly any bike lanes or paths, and the cars are much faster because the roads are wider and there are no traffic jams that slow car drivers down. But it's just a different mentality. Cycling in Tyrol generally, even in the winter, seems as normal as having a coffee for breakfast. They don't wear helmets nor any particular cycling clothes. They simply cycle because it's practical and fast. 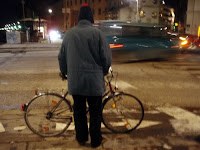 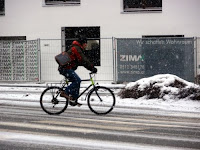 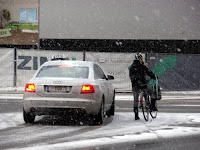 By the way, Tyrol itself has the second highest percentage of cyclists in the modal share in Austria - around 8%. Only further west, in Vorarlberg, it is higher with approx. 15%. That's where I originally come from :-). In comparision, in Vienna there are only 4% cyclists. On average, we have around 7% cyclists in the modal share in Austria, which is quite low compared to other European countries (this numbers were published by the VCÖ in the beginning of 2008). To me it's really strange that the parts with the highest percentage of cyclists in Austria are the west and most alpine ones, where it is much colder and where there is much more precipitation (both rain and snow). Plus, there are also more hills and mountains. It's similar in Switzerland, where there are even more cyclists although it is an alpine region. Hopefully one day this miracle will reveal itself to me.

As you can see I took many pictures of cyclists in Innsbruck – enjoy! 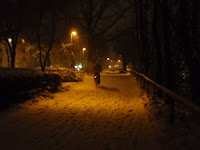 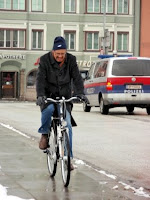 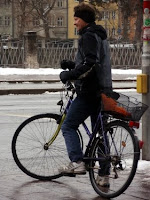 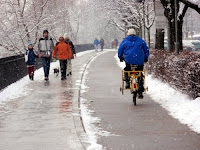 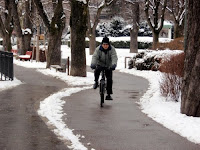 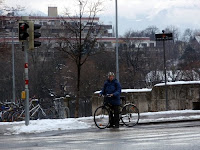 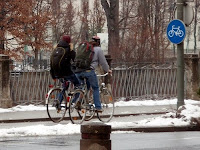 I haven't actually seen any studded tires there. I think, generally the roads are plowed alright, just not to well if there is heavy snowfall and not in the night. But overall, the road conditions are pretty good. Well, I think winters in Chicago are a little stronger, at least from what I have seen on Chicago Bike Winter. I guess studded tires can be an advantage if it's really icy and snowy, but are maybe a disadvantage if it's dry (don't know myself)?! Do you have two bicycles or if not, how often do you change the tires? Or do you simply use the studded tires also on good road conditions?

Hi Anna~ Nice pics. I like the 1st two, together. They make a visual slope.

As for why do people bike more in western Austria. Maybe they are sportier. Innsbruck is a ski town. Or, maybe it's got a little Swiss culture. Keep digging.