On Saturday Maff and I went to a party of our friends in Linz. Currently they are collecting old and broken bicycles to build some tall bikes. They get the bicycles from scrapyards and such for free. Some of them are still in good condition, sometimes even only have a flat tire as far as I could see that. It's sad that people throw such bikes away.. But well, I'm actually quite happy this time. Usually I don't have a bicycle in Linz. Sometimes I bring mine on the train, but in the new "railjet" train sets bicycle transport was cancelled and I have less opportunities now (very future-oriented, aren't they?). So I saw this bicycle on Saturday in their basement: 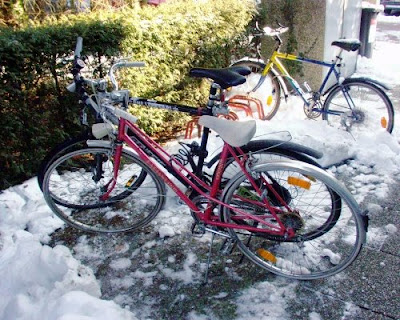 Radiant "Touring Sport" (the pink ladies' bicycle in the front)
It doesn't work yet, but it's still in good shape. From what I have seen so far, it only has a flat tire, the rear brake doesn't work and the rear fender is broken. The lights are also demolished. I don't know whether the gearshift is working. We will try to fix it this evening and see how far we get. Would be really nice to have a bicycle in Linz too. Even if it's just for a short time before they continue to use it for a tall bike..
Posted by anna at 10:08 AM

after surveying the bike, I think we should get along with these things:

nice price for a nice bike