Positioning on the road

Where am I supposed to cycle? Actually, this question is not so easy to answer. Our "Straßenverkehrsordnung" (austrian road traffic regulations) says that it's not allowed to cycle on sidewalks, that one has to use a bike lane/path if there's one and furthermore this, §7(1):

which translates to "The driver of a vehicle must, if not stated otherwise, drive as far on the right as it is possible concerning ease and liquidity of traffic but without endangering, constraining or harassing other road users, without putting oneself in danger and without damaging things." Ok, I'm a bad translator, but well, I guess you get what it's about.

The thing is, most beginners mistake this regulation with "you have to drive as far right as possible to let cars pass easily". And that is really dangerous. Why? This is what I'm going to explain in this post. So I don't tell you, what distance you have to keep from the right edge or where you have to ride on a bike path. The thing is: You have to feel safe! Where would you ride if there was no other road user around? That's where you should be riding anytime, even if there are a hundred honking car drivers around you. Of course, the busier the road, the more careful you have to ride (shoulder check etc.), but it shouldn't change anything about your position. And, even more important, don't overestimate the lines that divide the bike lane from the rest of the road. I'm not telling you to ignore the traffic rules, but you should be able to tell when a bike lane is actually more dangerous for you than the rest of the road (e.g. if it is only half a meter wide and directly beside a line of parked cars).

I'm now going to make you feel unsafe in order that you can estimate the dangers on the road better - and to find a good position for yourself :-). Plus, if you are self-confident enough to take the space you need, also car drivers will respect that.
There's one basic rule that you can apply if you're on a road without bike lane and don't know where to cycle: don't ride further right then the right wheel of the car in front of you is. And stick to your track.

If you feel comfortable to undertake (that is overtake cars on the right that had to stop at a red light) you can do this with less distance because you're the only vehicle that is moving. But you should still be aware of the dangers above (maybe a passenger wants to get out of a standing car at the very moment). 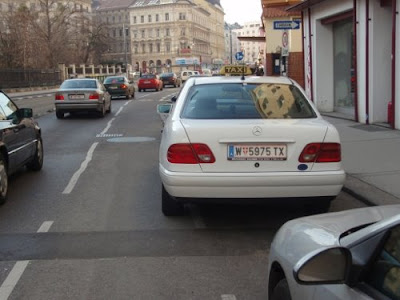 A taxi half parked on the bike lane. Can you see whether somebody wants to get out? Maybe there is a child or dog behind the cab that wants to cross the road? Might that little bump cause trouble and do you have to reduce speed? Isn't that bike lane to small and too close to parked cars to ride safely? Well, a bike lane isn't safe just because it's a bike lane. You have ride safely yourself. 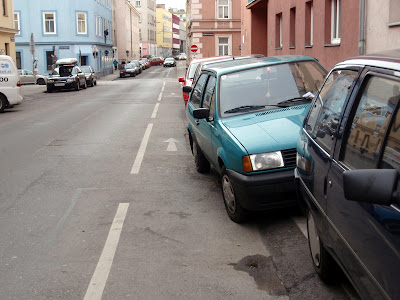 Would you want to use this bike lane against a one-way street? In such situations I mostly get off my bike and walk on the sidewalk - or don't use this route at all. I certainly can't cycle safely inside of the marked bike lane. Without parked cars it wouldn't be a problem though. 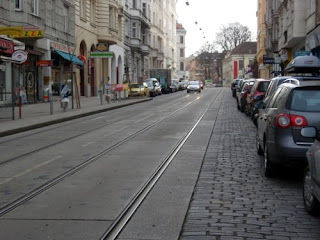 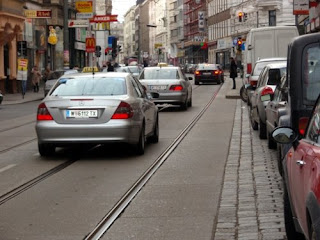 There's a long list of situations and how to deal with them on "How to not get hit by cars". It also contains some tips about positioning on the road -- e.g. "ride further left" is mentioned in nearly every situation. Apart from that, the most important "tool" for a cyclist imho is a shoulder check. Never forget that.

Hm, I think I wrote quite a lot now, maybe too much. Was it helpful? Can you add something that's important to you?
Posted by anna at 8:25 PM

ad parked cars: Not only parallel parked cars (opening doors) are dangerous. Ride yet further left when there are angular parked cars. Cars pulling out can cause pain too.

I would in my city, put "avoiding glass, gravel and junk that collect on the side of the road".

Love the pictures of Vienna streets.