What happened to the blue bike next door?

which in English simply means “This bicycle is designated to by removed by the MA48 [the garbage collectors in Vienna] at the next waste disposal.” with some contact details. Well ok, that's it then with the blue bike. Dead and gone. This week it wasn't there anymore, most likely 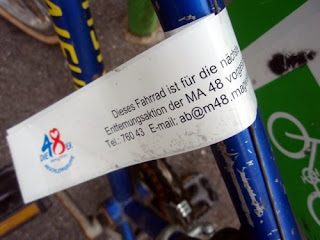 collected by the MA48 and not by the owner. Sad, isn't it?

I've also seen similar notes in other places, e.g. at train stations. The yellow note I saw on a perfectly well-functioning (but probably unused too) bike at a bike rack at the train station in Bludenz. It is much longer (sorry, horrible translation):

We want to provide you a clean and well-kept transport depot and also need your assistance for that. Your bike is parked at a spot 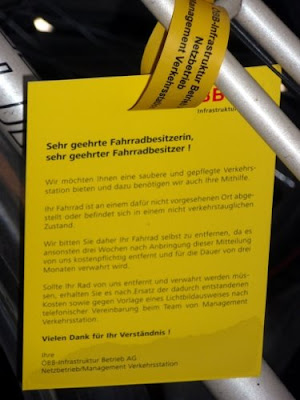 not designated for that or is not in a roadworthy condition. We therefore ask you to remove your bike yourself, because otherwise it will be removed three weeks after the attachment of this note with costs by us and stored for three months. In case your bike has to be removed and stored by us, then you get it back after the payment of the incurred expenses and proof of identity after an arrangement over the phone with the team of the management of the transport depot. We ask for your understanding!

Yours, the ÖBB infrastructure company”

Sorry, for this negative post this time. Next time I will talk about a bike that is still there (although abandoned too) and that I would quite like to get - an old Puch Clubman :-).

By the way, I remember that last year there was an article in the newspaper Der Standard about a guy that had left his bike outside during the winter and when he came back to start cycling in the spring, it was gone because it got removed. It is called Die Physik des Abschleppens by Roman David-Freihsl and quite entertaining. It's one of those nice little Viennese stories. There are many others by Thomas Rottenberg. I've picked out some of his bike stories from 2003 till now (sorry, all in German): Tolerranzzone, Survivaltips für Radfahrer, Klassik anders, Der Bike-Funpark, Fahrradabstellblues, Aus Freude am Fahren, Das Wunder, Fahrraddiebe?, Radleiche, Ministerrad, Freirad, Radschlossmysterium, Fahrradrückkauf, Porsche, Das Rad fällt um (ok: auseinander), Ein Fahrradbeauftragter and Gelbe Bügel.

What happens to the bikes if no one claims them? Our police department holds an auction once a year.
Here is another blogger's experience with an abandoned bike:
http://www.thehungrycyclist.com/blog/2009/02/bicycle-salvage-a-moral-question.html
I'm enjoying your blog!

Hi Lynn, I think the council in Vienna holds on to the bikes for a while (apparently you have to pay a lot if you want them back: 48€ + 2€/day + new lock). I don't really know what happens to the bikes if they are not collected within a certain time. Maybe they are just destroyed. I think most of them aren't really repairable anymore since they claim to only remove dead bikes with most parts missing. But surely they could be useful to some tinkers. In Linz they have an auction once a year, in Vienna I never heard of one (which doesn't mean that there isn't one).

Thanks a lot for the link! I'm actually tempted to steal a whole abandoned bike (the Puch Clubman that I mentioned), but I think I'm a too good person to do so. It's just really disappointing if you see a bike that you want every day and know that it is slowly destroyed by the weather because nobody cares.

I'm now also looking forward to read some of your blog, you have many nice pictures ;-).

Interesting. Other than the sad abandoned bikes, this isn't a negative post to me. I'd say your government goes through quite a lot to notify the owner and then remove. I have no idea how it's done in Chicago, but I'm sure there are no notes left for advance warning.

I have the answer. Well, at least one answer for a quite common procedure in Vienna and also the rest of Austria. Maybe you can tell me how city councils get rid of those bikes elsewhere. locksmithinthecolonytx.com

The blue bike is/was a kiddies bike parked at a bike rack in Vienna that I passed every day. Actually, the bike rack is right in front of a school, so it's quite likely that it was used by a pupil there. indianapolis auto locksmith