I never cycle on sidewalks. Not only because I'm not allowed to. Even more, because I think it's way to dangerous. Firstly, it is dangerous for pedestrians cause cyclists are much faster than them. The speed of cars on the road is much closer to the one of cyclists than the pedestrians' speed is (<5 km/h). But it's also more likely for cyclists to get hit by cars. Why, you ask? Well, car drivers don't expect cyclists on sidewalks and easily overlook them when they turn. And even if everybody would watch out, sometimes it would still be impossible to see each other (e.g. if there is a line of parked cars in between). Turning cars are a threat, no matter if they come from ahead or behind. You can only avoid such accidents if you ride really slow and completely stop at each intersection. But that's not very energy efficient and slow. So why cycle on a sidewalk in the first place? Just don't do it. On the road you are much more visible to car drivers - hence safer - and also much faster :-).

Well, as I already mentioned, in Austria we are not allowed to cycle on the sidewalk. But we have bike paths (one-way or both ways) on sidewalks. And there are also a lot of so-called "combined foot and bike paths" that are for both pedestrians and cyclists (either separated by a line or not). And some of this constructions are just as dangerous as cycling on sidewalks. Unfortunately I'm forced to use them (if one has a road bike s/he doesn't have to cycle there, but I don't have one). Sometimes they are an advantage, e.g. if it is a short cut that I couldn't use otherwise, but they are a huge disadvantage and risk if they are just built to keep the road bicycle-free. 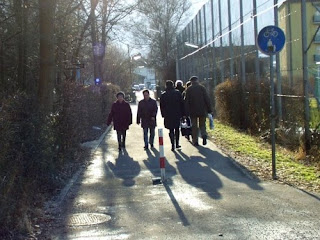 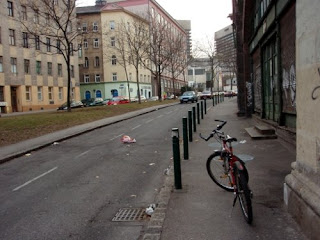 A lot of accidents between cyclists and cars/trucks in the city happen on bike paths and bike path crossings because cyclists are not visible to car drivers there, but still feel safe (although they aren't). In addition, most car drivers don't shoulder check, what makes it even more risky. For truck drivers it's even more difficult to see you since they can only use their mirrors - never ever stop right beside a truck at an intersection! Last year many cyclists have died this way - overran by a turning secondary car/truck on a bike path (crossing).

Don't get me wrong. I do like bike paths out of the town, but generally not in the town itself because there are way to many dangerous junctions. Ok, it's not a natural law that they are dangerous, but due to bad traffic planning, dense housing and illegal parking a lot of them are. In the city I prefer sufficiently wide (!) bike lanes on the road because there I'm visible to car drivers and much safer. Or even better, low speed limits and many restricted areas (30 km/h zones, residential streets and such) with no bike lanes at all. And a few bike paths beside busy and important roads with a lot of (heavy) motor traffic. Appropriate bicycle infrastructure meets the hierarchy of the road. 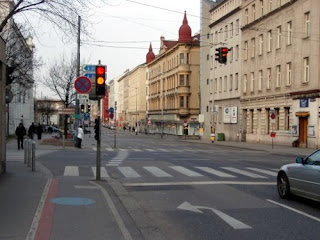 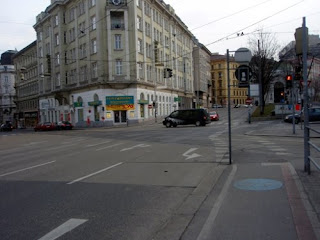 Another bad example of a bike path in both (!) directions. How small might it be? 1-1.2 meters? Do you think that two cyclists can pass each other? Compare it to the car lanes next to it and form an opinion yourself. There are 4 of them in each direction - the location is close to the previous picture. At this particular spot you can even see 5 lanes. Well, space has to be saved somewhere, doesn't it? I just don't get why they built a bike path there in the first place. To get the road bicycle-free I suppose.. Also note that cyclists and turning car drivers have to be really careful at this bike path crossing to not interfere with each other. Such designs bear extra potential for conflicts rather than avoiding them.
If you want to see some good examples of bike paths you must go to Copenhagen or Amsterdam etc. Maybe I sound a little bit to pessimistic - but in Vienna there are hardly any. But ok, I will take some pictures of well-designed bicycle infrastructure in the future too, I promise ;-).
Posted by anna at 1:56 PM

Since I cycle I never thought so...Many thanks for the insights!!! (I think I should get used to cycle on the road...).

By the way, after two months of inactivity I put smth in my blog about Catalonia. It is poorly written but well, I will rewrite it better and add things I forgot to say as soon as I can!

Also, I'd like to congratulate you for this blog! I think you write well and I learn a lot of things about cycling :D

Hi, well if you don't feel safe to ride in heavy traffic start out on the weekends to cycle on the road. At least in Vienna there are less cars around at that time (and no trucks) what makes it a bit more comfortable.

Ok, ok. 1000km of bike lanes are quite a lot (but they also add streets to the bicycle infrastructure if they just put a small sign somewhere saying that it is a "bike route"). But still. Maybe I sometimes don't appreciate them enough. There are some roads where I definitely like to have a bike lane or bike path. Sometimes I just don't agree with the way they are build, especially if I would see some better and safer options..

I'm going to check out your blog now..