The term "Critical Mass" has different but similar meanings, e.g. it's widely-used in physics. According to the Free Dictionary we have the following definitions (only a small selection):

critical, adj.
forming or having the nature of a turning point; crucial or decisive

mass, n.
a grouping of individual parts or elements that compose a unified body of unspecified size or quantity

critical mass, n.
an amount or level needed for a specific result or new action to occur

As a cyclist you probably also heard about critical masses. On the worldwide Critical Mass site you can read where the term comes from:

The name "Critical Mass" is taken from Ted White's 1992 documentary film about bicycling, "Return of the Scorcher". In the film, George Bliss describes a typical scene in China, where cyclists often cannot cross intersections because there is automobile cross-traffic and no traffic lights. Slowly, more and more cyclists amass waiting to cross the road, and when there is a sufficient number of them - a critical mass, as Bliss called it - they are able to all move together with the force of their numbers to make cross traffic yield while they cross the road.

I sometimes come across such critical masses of cyclists in the rush hour in Vienna too (unfortunately only in the summer). It's very comfortable to ride in a critical mass cause it's much safer, although you shouldn't be in a hurry but just ride along with the crowd in a comfortable and slow speed. 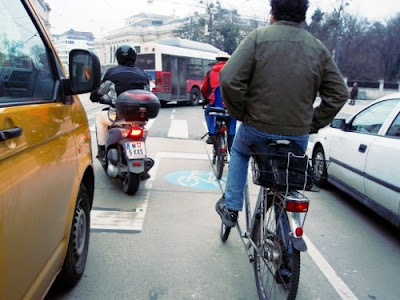 My first (and so far only) "critical" mass this year

But then, there is also the other meaning of it -- the event, which we will refer to in the following:

Critical Masses take place in many cities all over the world. Generally it's a monthly "random" gathering of cyclists who ride around town together. It all started in San Francisco in 1992. Read more about it on Wikipedia, the Critical Mass wiki or simply search the web. Have you got one in your town? You don't know? Ask your local bike advocacy or start a Critical Mass yourself.

In Austria we currently have Critical Masses in Vienna, Graz, Linz, Salzburg, Innsbruck, Vorarlberg and Wr. Neustadt. Read more about it here. Hurrah! The next Critical Mass in Vienna is already this Friday at 4.30 pm at the Schwarzenbergplatz. I look very much forward to meet some friends I haven't seen in a while. What's better than cycling around town with friends and chatting all along? I can't think of much.

A few pictures of the last Critical Mass in Vienna, February 2009 (not mine)
I see the Critical Mass as a social event, but of course also as a way to promote cycling in a very easy and peaceful way. Well, not all about it is positive and easy-peasy. Dave Moulton (famous ex-framebuilder) writes about some negative aspects of Critical Masses in the US on his blog, and I also see some minor ones myself.

Well, just come along and form an opinion yourself!

By the way, the biggest Critical Masses are very close -- in Budapest, Hungary. But they are completely organized and take place twice a year. Last time an estimated number of 60-80.000 riders took part. Read about it on Greg Spencer's blog. In Vienna there are around 500 Critical Mass riders in the summer and around 100 in the winter, slowly increasing.
Posted by anna at 11:53 PM

Speaking of Critical Mass: A 5-day mass Critical Mass has been announced in Madrid starting the 29 April. More info here:

Wow, that sounds interesting! I didn't know that something like that is going on in Madrid. Thanks for the link.

Sweet blog you got here. I love that yellow middle picture - oh so fun.
Cheers from San Francisco, with love
xo.meli