Cycling is the answer to everything.

Is it? Well, it isn't the solution all our problems, but for many of our traffic, health, social, economic and environmental problems, I believe. Here's some easily accessible information that might convince you too (in case you aren't convinced already):

There's a brochure by the European Commission called "Cycling: the way ahead for towns and cities" (1999). I have a link to a download in the right frame where it says "Cycling guides". You can download an English version here, a German version here and a Spanish version here. There should be versions of it in every European language, but the link on the website of the EU didn't work so I could only guess the endings of the .pdf-files. Maybe you can write them an Email yourself if you want another version.. 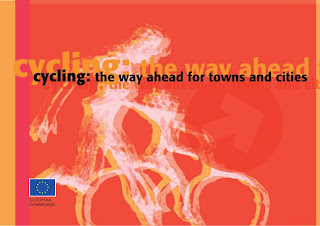 Why do I think this is interesting? The handbook contains many successful examples of bicycle infrastructure in Europe, attacks common prejudices and tells us how we can resolve traffic problems by cycling. They describe the handbook in the following words:

This EC handbook stems from the idea that the worst enemies of the bicycle in urban areas are not cars, but longheld prejudices. It therefore corrects some of the prejudices connected with the use of the bicycle as a regular mode of transport in the urban environment. It also suggests some simple, inexpensive and popular measures, which could be implemented immediately.

So if you're a bicycle advocate, you should definitely dig into it. Although it is mainly written for policy makers in (European) cities, it is also worth reading for "normal" people who are interested in cycling. You don't need any previous knowledge about traffic or spatial planning and it contains many illustrating pictures, graphs and examples and isn't even very long (only ~60 pages). In the end you will have many arguments to convince people why cycling is good for them :-).

Since I'm already at it: There is an initiative by some German professors and students that want to promote cycling as natural and positive means of transport by focusing on the joy of cycling. That's also where the German title "Radlust" comes from. You can get all the information and downloads on their website (available in English and German). They started out 2007 with the following observation:

The bicycle is the worlds most used means of transport. Nonetheless there was no development of a noticeable cycling culture in Germany. This is incomprehensible if you consider the wide spread possession of bicycles – diverse potentials and advantages of a sustainable means of transport remain unused.

Cycling IS the answer to everything! The bike is like a magical unicorn, but real ;)

I've actually read that EU commission paper! It's quite informative and just reinforces my belief in sound bike transit policy.

My experience in Oldenburg was not typical for Germany as a whole. I guess that NW Germans are more-or-less culturally similar to the Dutch, so it makes sense that bike culture also took root in the flat rainy plains of Niedersachsen.

Radlust! I love it! Not only would it be a great blog title, but also a fab band name!

So, I'll just print it and read it when I have some time.

@ tsalyards: I don't know how typical Oldenburg is. There are some areas in Germany where cycling is quite popular, e.g. Münster, Munich, Erlangen and so on, but I don't know much about the rest. My sister lives in Düsseldorf, thus very close to the Dutch border, but not many people cycle there. But altogether cyclists are around 10% of the modal share in Germany, which is more than in Austria and many other European countries (not talking about Denmark and the Netherlands now).
About German - sometimes I do post German links, but I don't want to use it too much cause not everybody will understand it. And I have to practice my English anyway ;-). But there are many nice German blogs too, maybe I could do a few review once and show you some that I like.

@ Anna: Thanks for the link. The pictures are great, would be nice if you can tell more :-).

I'd love it if you could turn me on to some good German language bike blogs! :)

@ tsalyards: This is my favourite German language bike blog: http://www.rad-spannerei.de/blog/ - I'm afraid there aren't many other German blogs I would recommend.