Hi everyone! My name is Sonja and I'm a 4th year geography student in the University of Turku. I am a regular cyclist, not for fun, statement or sport, but simply for transportation. Safe cycling should be everybody's right because it is efficient, environmentally friendly and good for you!

I met anna in Budapest Mobility Week Workshop. She was one of my roommates, and I greatly enjoyed her company and ideas. She asked me to write something on her blog, so if you are interested, I'll be writing here every now and then. Here's a short introduction to my city:

Turku is a city of 175'000 people (300'000 at the agglomeration) located at the south western coast of Finland. I have lived there for 6 and a half years, and almost always used cycling as my primary means of transportation. In 1997 11.5 % of all trips were made by bike and half by car, the rest by public transit and walking. There is a separated bike lane network centered at the city center so it is easily accessible by bike. Most of cultural, economical and educational activities also take place at the center, so it is a city with an active core, although suburbanization is an increasing trend. There is also a rather functional market square-centered public transportation system, but you are not allowed to take your bike into the buses. There are lots of bike racks everywhere in the city. 45% of households don't own a car, but most of these households are singles living on their own, like me :). Most of us go around by bike, bus or walking. 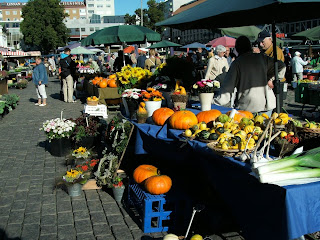 I'm happy to say, that Turku has a good reputation as a cyclist friendly city. There are many functional bike lanes, and most of the motorists respect cyclists and bike lanes. Cycling is rather safe, and in the last 20 years the share and amount of bike accidents has decreased. Also, for bike tourists Turku is a nice base town. There are ring roads that leave from Turku or nearby towns to the Archipelago of Turku, which is a famous holiday destination for cyclists. 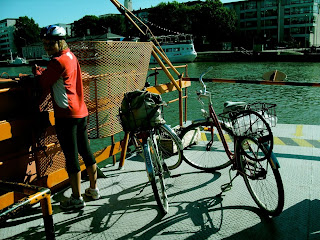 My friend Heidi Heinonen riding Föri, a light traffic ferry, accross the river with our bikes

However, despite of the great plans of the city to build new bike lanes and promote cycling, nothing new is happening. The city fathers don't seem to care too much about developing the city light traffic. There are issues with the accessibility of some bike lanes and the safety of some crossroads. Also, increasing area of the city is getting car dependent because of suburbanization. Some in the neighboring municipalities are not easily accessible by public transit and are too far to cycle from. The system in Turku is not as good as e.g. in Netherlands, but it is better than in Budapest, Hungary, or Thunder Bay, Canada.

Thank you for your interest and thanks for the opportunity, anna!

P.S. If you have something specific that you want to hear about, please let me know.
Posted by Sonja at 4:16 PM

Welcome, Sonja! I look forward to hearing more about your expereinces in Turku. I spent some time in Helsinki years ago, en route to St. Petersburg and loved the city and people there.

We really agree with your first paragraph, it so simple to express in deep meaning of cycling.

Interesting to hear about cycling in Turku. The number one excuse here in Canada when it comes to biking is our winters.
I believe Turku's winters are about the same as most Canadian cities, if not worse. Is there a drastic decrease in the amount of cyclists during the winter there?
We in Canada like to claim we're tough when it comes to winter. I'd guess less then 0.3% of the population rides in the winter months however.

It seems to be the same problems in most Cities,the Councils always Promoting Car use at the expense of Cycling and Public Transport. They need to Ban Vehicle Use in the Centre of Cities and Towns and only allow Bicycles and Public Transport. Return the Streets to the People and make it a Safe Environment to Live and Breathe in. They never want to put the Car and Business Communities Noses out of Joint.

Spend Millions on Roads and M .Ways and Put Cycling and Pedestrians Needs on the Long Finger.

Thank you for the welcoming!
It is nice to see that there are so many readers from all over the world.

And, Ryan: I spent last year in Thunder Bay, Canada, I know how tough it gets. It was freezing, even for a Finn. But worse than the weather was the city planning, which makes cycling very dangerous. I was planning to buy a bike the first thing there, but I just couldn't face all those SUVs on the streets and the lack of bike lanes.

Here the amount of cyclists does decrease in the winter time, but many just change to their winter tyres, bundle up and hit the road. That's what I'm planning to do this winter, wish me luck!

Hi Sonja, welcome here. I'm very much looking forward to read about your winter cycling experiences. I expect them to be slightly different to mine, but still fun ;-).

Hi Sonja,
Thank a lot for your nice writeup.
I am now in Turku, a student of Åbo akademi. last September I came from India. I like biking very much. The dedicated lanes for the cyclists made me crazy about the biking in new city. I used to plans for new routes around the city in each weekends in unknown roads, unknown places, despite of the fact that I understand neither Swedish nor finish. I must praise the city transport planning as well as the culture of showing respect(/giving the priority) to the pedestrian and cyclist by the car riders! I look forward to hearing more about your experiences in Turku. I love to be a part of your team for biking. Thanks a lot. best wishes for the winter!

Hey Rambo! Here's a tip for you: don't plan the routes, just try to get a little bit lost, choose a path that you don't know where it leads, that is the best way to get to know new places. I still do that, even though I've lived here for years. I have to admire your spirits though, it is not easy to be on your own on the other side of the world. Hopefully Turku has treated you well (it can be quite exclusive) and will continue to do so!

Hey there!
I'll be a student in Turku for an exchange semester from February on. I was wondering if you have any tips where you could get cheap but good used bikes? Obviously it shouldn't be expensive, but I still would like to cycle around also for fun a bit (maybe even explore the archipelago), any guess how much such a bike costs in Turku?
Thanks for your help!