It's a sad story. Especially in the winter you can see many bikes out there - cold, alone and dying -, abandoned by their owners. Each of them has a story to tell, but nobody listens anymore. Is this where our society is going to? Is a bike worth nothing?

I simply don't understand it. Everybody talks about stolen bikes. Nobody talks about abandoned bikes which in my humble opinion are many many more. Why don't people give them away or sell them if they don't want to ride them anymore? Why do the even lock them if they don't care? But the only thing they do are leaving their bikes alone, blocking parking places for people who actually want to use them and destroying a valuable object.

Please, if you don't want to ride your bike in the winter, take it inside! Or at least cover it up with something so that it doesn't rust that much. Otherwise you will not be able to (safely) use it again after the winter. I can tell you that for sure. 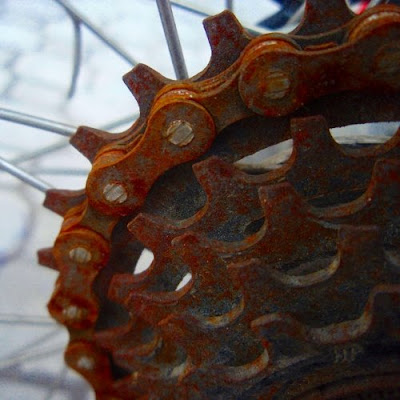 A chain is only as strong as its weakest link.
But while we are at it - yes, a lot of bikes get stolen too. But most of the bikes that get stolen don't have proper locks. A rough rule of thumb says that a bike lock should be at least as expensive as 10% of the value of the bike. By now, my bike lock probably even exceeds the value of my bike (my bike is really old - it didn't get stolen for more than 12 years now ;-)). I use an Abus U-lock with safety level 9. It cost around 45€. But there are much better ones up to maximum level 15, like the Abus Granit X-Plus 54, which costs around 90€ (generally theft insurances will offer you a discount if you use that lock). There are also other companies that produce U-locks and flexible lock chains, e.g. Kryponite. Avoid using number locks though. And - even more important - lock the frame (and not just the wheels) to a fixed object. For more tips check out how to secure bicycles.
Posted by anna at 2:39 PM