Cycling between the fronts

Do you know people who cycle daily because cycling is their job? Who comes to your mind? I naturally always think about bike messengers, mailmen, rickshaw whallas and bicycle taxi drivers, newspaper deliverers, ice-cream sellers and that kind. Recently I also came across cycling policemen in Vienna.

But what about people in very rural areas? There are generally little paved streets and it's tough going. Countrymen use tractors and robust four-wheel drive. Sometimes, however, such vehicles are too big. The military, for example, uses bicycles to patrol at the Austrian border in Burgenland: 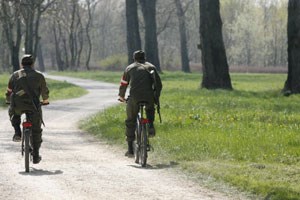 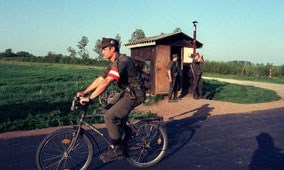 And here's a picture of the Fietspatrouille, Dutch solders on bicycles in Afghanistan: 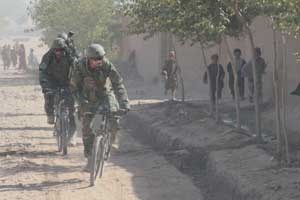 Is your military also on bikes? Or the police? What comes to your mind when you think about the bicycle as a military vehicle?
It certainly reminds me that not everybody riding a bicycle is automatically a good person (and not a bad one either). Many people ride bicycles, just because it's convenient for them or because it's their job. Some I like, and some I don't like.
Posted by anna at 8:55 AM

See the link: http://www.bikepatrol.nl/andere%20mountainbike%20teams.php
It's in Dutch but the photos say it all. Ambulance bikers in London & York, First Aid bikers, Firemen, forest rangers, security patrols, you name them. Whatever gets you to the Tatort earliest, and in many cases it's the humble bicycle.

@ Frits B: Brilliant link, thanks a lot!