Last summer I worked in Zürich, Switzerland. By train that's about 9 hours from Vienna and there are even three direct trains each day. On two of these trains it's possible to bring the bike along so that was what I did. If you're interested in the synergy between public transport and bicycles in Switzerland you can read one of my older posts from March. I think it works perfectly there. But there are also other outstanding things concerning bicycle infrastructure ...

I lived on the very border of the city and the university is in the center. Although Zürich is much smaller than Vienna (only about 350.000 inhabitants), my daily commute was therefore longer than the one in Vienna (about 7 km ~ 4.3 miles). Zürich is a very hilly city too. Basically I had to conquer one steep hill both ways which took me about 40 min once I found the best route. It was fun to see mums with two kids in the trailer passing me on the uphill sections. Well, a remarkable number of people (especially parents and older people) uses pedelecs -- electric bikes where you have to pedal to regulate the motor. It's still only a small minority, but they are visible.

I liked my route a lot. It didn't have to use many bike lanes (not even 1 km altogether), but for most of the distance I could cycle through quiet side roads and also cross a park. Generally cycling in parks is not allowed, but they opened one short cut through the park for cyclists. The paths in the park are not paved, but cycling on gravel is just as enjoyable and good for a change. The only thing I missed was sufficient lighting in the park at night. There was some, but not quite enough if you don't have a strong headlight (LEDs are not so good for that purpose). Well, it was possible to bypass the park, so that wasn't really a big problem. Altogether it was a very relaxing and scenic ride and I enjoyed it a lot.
On the side roads they have a lot of speed bumps, but they are quite comfortable as they are rounded down and most of the time have a gap for cyclists on the sides (unlike the angled cobbled ones I know from Austria). Even such small details can make a huge difference and it's worth to think about them during planning.

Speed bumps in Vienna (left) and Zürich (right), both with vertical exaggeration
Moreover, they have many artificial dead ends which are open for cyclists and pedestrians. I think that's a brilliant way to achieve quiet residential quarters with no through traffic of cars. It would be great to have that in Vienna too.

But what stunned me most was the behavior of motorists. In the beginning I was a little worried about my knowledge of Swiss traffic rules, because whenever I came to a junction of coequal roads car drivers stopped and waved me through -- even when I was approaching from the left. Only after people at work ensured me that right-before-left priority also holds in Switzerland, I understood that Swiss people are just very (bicycle) friendly :-).

And there is much more to tell about cycling and transportation in Switzerland. Stay tuned, I will intersperse some more topics in the future. 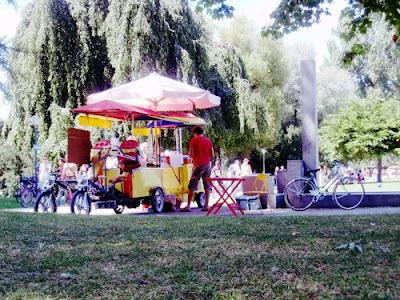 Human-powered ice cream cart at the Zürisee
Posted by anna at 9:42 AM

Modern high-performance LEDs can literally turn night into day. I am using an LED headlight powered by a hub dynamo and I am already experiencing slight problems with attracted insects. :)

surely an electric scooter is the best way for daily commuting in this era. Check out details review here https://www.reviewsstore.com/best-electric-scooter-for-commuting/