Hola, this is actually anna from Vienna. I'm currently visiting Catalonia. It's a surprise visit for the other Anna, organized by her boyfriend Xavi. He also ensures that I do a lot of bicing and sightseeing while Anna is busy at work :-). I've been to Barcelona before in 2002, but only for one day. I think many things have changed the face of the city ever since, especially the cycling boom that has started with BiCiNg (Anna was damn right about that). So here are just a few of my impressions and comparisons to Vienna:

Bicycles
The vast majority of the cyclists here use BiCiNg bikes, second probably being folding bikes (quite unusual for me). BiCiNg bikes have three gears (the new Citybikes in Vienna will also have that), pneumatic tires (compared to solid rubber tires in Vienna), a refreshing red color and all the good stuff (fenders, chain and skirt guard, front rack, lights). In Vienna borrowing the city bikes is more involved, but you can choose the bike yourself. Here, the system chooses it for you and sometimes you have to repeat the procedure if you catch a broken bike. 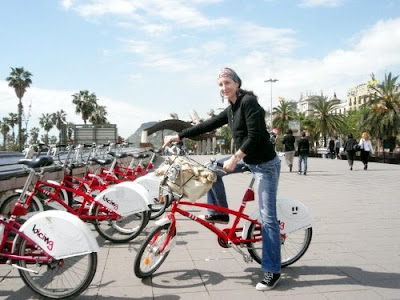 Me bicing at the seafront this morning
By the way, can anybody explain me the sense of a smaller front tire?
Bicycle infrastructure
The parking areas are designed as in Vienna – simple but very robust and safe frames. There's a decent number of bike lanes and paths. I absolutely love their design, cause they are straight, sufficiently wide, both-way bike paths have a center line and there are no complicated detours -- no zig-zag, narrow or too close to parked cars bike lanes/paths as in Vienna (Austrian traffic planners can take a leaf out of their book). Plus, there's an awful lot of BiCiNg stations that people use all the time.
From left to right: 1. bike racks in the city center 2. cyclist on a both-way bike path on a sidewalk (BiCiNG station at the left) 3. bike lane in a one-way street marked red at the intersection

Cyclists
As Anna already mentioned to me, many people cycle on sidewalks here. I do not appreciate that, because it's much slower and cyclists make themselves second class citizens. But on the other hand I can also see why people do it so much here: bike paths that stop in the middle of a sidewalk with nowhere to go or no possibility to turn (also, bike paths on sidewalks misleadingly suggest that cycling on sidewalks is ok and safe), a lot of one-way streets, very broad sidewalks in most places and sometimes no bike lanes in busy streets.
From left to right: 1. handsome guys always walk a BiCiNg bike 2. true Barcelona cycle chic in front of the Arc de Triomf 3. Anna from BCN on a segregated bike path

Red lights
In fact, many people ignore red lights here -- motorists as well as pedestrians and cyclists. While most of the time people watch out for each other, I think that this is a reason why many pedestrians die in traffic accidents. Once a motorbike driver shouted at me and drove very close past me because I was crossing the road in a normal speed (at not running) when the lights changed to red. Why? People here start driving when the pedestrians' light turns to red and not when their own light turns to green. It must be frustrating for traffic planners to calculate proper reaming times and seeing everybody ignoring them. And I also think that this is dangerous for old and disabled people and families with kids.
Tourists on bikes
BiCiNg bikes are not meant to be used by tourists, but Anna lends me her BiCiNg card while she is at work. There are a lot of other opportunities though – trishaws (bike rickshaws), bike tours with guides and bike rental, e.g. via barcelonabiking.com.
From left to right: 1. bike taxis in the center 2. cool guys on rent bikes 3. this is just to point out that the weather wasn't always sunny (Xavi and myself also cycled in heavy rain and hail)

In fact I could tell a lot more and show you many more pictures, but I will save them for another post. I also did a few videos which I might cut on the train back home to Vienna. For the moment I will just enjoy the rest of the week in Catalonia :-).
Posted by anna at 6:05 PM

Those BiCiNg bikes look really cool! Why aren't they meant for tourists?

Excellent article! Watch out for those motorheads.

Not for tourist? It might be that tourist are there to spend money, not use cheap city services. It could be a boon for bike rental services, if tourists see all the locals riding bikes and want to themselves.

It seems that bicing is also available for tourists, but I haven't confirmed that.

You have to get a tourist bicing card which is said to be available at the Christopher Columbus statue.

Just a guess: the smaller front wheel is just "design"?

Thanks for another glance at the impressive bicing system.

This looks like such a beautiful city. I will have to add it to my list of places to visit!

About BiCiNg: Ok, maybe it is possible to get a tourist card (the normal card is 30€ per year), but myself and Anna don't know anything about it. Let me know if you find out more about it.
Also, the system is only set up in Catalan and Spanish, not even English, which makes it impossible for most tourists to use it.
I don't know why they don't open it for more people. A quick guess is that they are currently already at their limit (much more people use it than expected) and set up the system step by step (after all, it's only two years old).

Running reds and not paying attention to traffic laws is highly iritating. It's very difficult to accomplish much in terms of cycling infrastructure if people can't trancend 3rd world/anti-social behavior. Tsk tsk Spaniards. That kind of selfishness is one of the reasons I could never live in a place like India or Italy. People will out your life at risk to save 1 minute...even though they are notoriously late for everything.

Front tyre is smaller in order to allow manoeuvering to lock bicycle into the station. Smaller wheel gives room enough to pull-up and lock.

These bikes have been especially engineered to be difficult to steal/sell parts on. As a result, perhaps having different sized tires means they aren't as easy to trade and the market for reselling is smaller? Just a guess.