Well, as most of you probably already know, there are two Annas writing on this blog:

anna from Vienna, Austria (me)
Anna from Barcelona, Spain

Although we live far apart, we've been close friends for many years now. We don't meet often, but whenever we do we share a great time. I visited Anna last in April 2009 in Barcelona (a surprise visit for her birthday) and also wrote about my impressions of cycling in Barcelona on the shared BiCiNg bikes: Anna cycling in Barcelona. Moreover I also shot my first bike video in this fancy place (none have followed so far, but I plan to do one in Vienna too).

One of the best things about our last reunion was definitely the Tandeming on Anna's birthday. You can see a few pictures and read about all the fun we had if you follow this link. There is, however, another picture that I shot with my analogue medium format camera Diana (it's a lomo camera in case anybody is familiar with the concept) and which is still unknown to Anna. Since I don't use the camera very often it takes forever to finish and develop the films. Thus I only received this funny picture a few days ago: 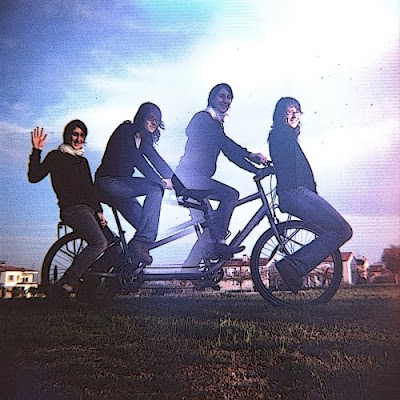 From left to right: anna, Anna, anna and Anna
Note that the "doubling" effect is not due to Photoshop (boring) but due to a so-called Splitzer (a multiple imaging slicing accessory for the Diana) and a rearragement of ourselves. The quality could of course be better, but hey, it's just a fun camera. And we certainly had a lot of fun!
Posted by anna at 9:40 PM

Thanks, for the words you wrote and the picture.

Have a great day! (not like the nasty storm and rain we have here this morning).

Cool pic! I think that I sometimes don't put pictures on the blog, because I don't think it looks as professional as other folks pictures. That's stupid. Waiting for perfection is a long wait. Through practice, I get better at taking those kinds of shots.

Nice that you can fit 4 people on that bike.

Just found your site today at work. So cool to be able to reach across continents!
I don't have a lot of pictures up- But you can check out where the Worlds G-20 summit was held last month.
Got to run it's 70F (I don't know the conversion to C- sorry)and sunny time to ride!

I love the dreamy effect of this picture. Do you find the Diana film difficult to develop? Are there no photo shops that can do it for you at a reasonable price; I certainly want to know because I have been eying the Diana in all its permutations for a while now. The new Dorothy Tang Diana is especially striking.

Thanks for all the comments :).

@ Bronze Bombshell: I don't develop the films myself, I can bring them to a photo shop in Vienna. But there are not many that actually offer to develop medium format films, so you might want to that check out before you buy such a camera. It is of course more expensive to get them developed in a photo shop (still affordable though), but I don't have enough equipment to do that myself. Well, I also have a proper medium format camera, the Diana is really only for fun. It is not really possible to produce high quality pictures, but I think it's more about the feeling and fun anyhow :).