Due to the ring structure of Vienna, there are two major roads, called Ring (the inner ring) and Gürtel (the outer ring), in the center. Both of them are of course highly frequented by cars, cyclists and pedestrians. There are bike paths on both streets, but none of them is really pleasant for cyclists.
Two major connections in Vienna: Gürtel and Ring bike path

The main complaints of cyclists are
As it is now I would prefer to ride in the car lanes, but due to our traffic regulations I'm not allowed to (exceptions only for road bikes and certain trailers, see StVO §68 (1)). I'm only allowed to use "the road" when there is no bike path.

Because of one of the building sites at the Gürtel bike path (they repair a short piece of tram lines and block the bike paths for weeks now) at U6 Thaliastraße I actually can use the "normal road" legally in one direction for about 50m. I always enjoy that. So much space, so fast :). Usually cars are ok with me cycling there. Not all of them might see the obstructions for cyclists, but as I'm only in "their lane" for a short while and they are often stuck in a traffic jam anyhow, "they" let me be.

However, today, on our national holiday, within these 50m two car drivers honked at me. Apparently they didn't see the building site and of course there first reaction was something like "Hey, you cyclist, get out of my way!". I really don't understand such a behavior a) at all and b) on a holiday where nobody is in a hurry anyhow. Suggestions? 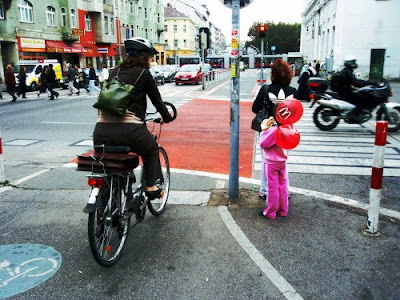 A not so bad part of the Gürtel bike path
Well, since I'm almost daily annoyed with both of these bike paths, I will write a little more about them and show you some explicit incorrect planning of bicycle infrastructure in Vienna. In my humble opinion is this halfhearted planning one of the main reasons why a city with so much bicycle infrastructure (> 1000 km) still has such a small amount of cyclists (~ 5 %).

The Ring bike path is currently under construction. Small bits are improved, but the whole of it still just is a patchwork of leftover areas assigned to cyclists rather than a thought-through bike path. You can get some insight by reading "Stadt Wien beschließt RingRundFiasko" by IG Fahrrad (a Viennese bicycle lobby).

For the Gürtel area I have a rather radical suggestion for a redesign which would be convenient for most people (abutters, pedestrians, cyclists, shop owners, bars etc.), but well, is novel. More about all that another time.

Nevertheless I will also show you some of the good things about these bike paths, maybe do some videos so that you get an overall picture. After all, cycling is fun and I like to share that :).
Posted by anna at 12:48 PM

It all sounds very Depressingly Familiar,with Ignorant Impatient Motorists trying to Shove past you always in a Hurry,especially those Taxi's they seem to be worse of all. In Dublin we have the Nth Circular Road on the Nth Side and the Sth Circular Road on the South also we have an Inner Tangenital Road through the City on the Nth Side. They have Idiots thinking up these Stupid Names in D.C.Council.

On our Cycle Paths you can get Doored by Opening Car Doors if you do not keep out to the Margins or else away out from these Lanes. Which brings you in direct Conflict with Motorists.

I would say the Worst time to be Cycling in Dublin is at Rush Hour in Morning and Evening at other times it is almost very Pleasant and Peaceful. But the Motorists always have the Nasty Habit of Parking and also Driving on the Cycleways and Paths and nothing is ever really Enforced by the Police.

In Turku motorists are usually quite polite for the cyclists, but the bus drivers are another story. Once I was sitting in a bus, and a cyclist was riding on the car lane (legal here) and the crazy bus driver started shouting red-faced at the poor guy while passing him by! He did not ever look at the road and the cyclist was of course scared to death. Fortunately nothing serious happened that time, but the crazy bus drivers do things like that here all the time. A few weeks back one pushed me (I was cycling there legally) to the opposite flow lane and drove on to the red lights. It was my turn to be scared to death O_o

i recently tried the new infarstructure on the Ring in Vienna (between Urania and Karlsplatz)
and i have to say that first its much better than before(it really was catastrophic), but now i think it is quite convinient. You even don't have to change streetssides every 50 meters.
But perhaps the paths are too small and in summer cyclist and pedestrians seem to have to battle.