The importance of bike racks

According to Christoph Chorherr's blog entry from April 2009 (a Green politician) there are about 1 Million bicycles in Vienna but only 18.000 bike racks available. This is of course far to few and explains

a) why many bikes get stolen (locking the bike frame to a fixed object is essential) and
b) why so many bikes are locked to street lamps, traffic signs, fences etc.

Well, this number is old. Recently I have seen many new bike racks, especially in the city center. The city of Vienna builds bike racks in two different types, both of which are pretty safe if one uses them correctly (see how to secure bicycles). 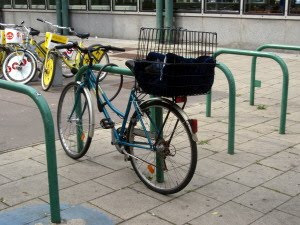 The most common type of bike racks in Vienna and many European cities.
Do you have such public bike racks too? Or does your city build other ones?
But it's not just the sufficient number of bike racks that is important, it's also the accessibility that plays a key role. I don't mind walking 500m from the bike rack to my destination if I leave my bike for a few hours (e.g. if I go to the cinema, theater, dinner or so), but if I just have to buy a milk or post a letter (which takes less than 5min) I want to be able to park my bike right outside of the shop.

This is something that is certainly missing in Vienna. There are very very few shops with bike racks, even in major shopping streets like Mariahilfer Straße bike racks are rare. There is, however, one positive example that sticks out: 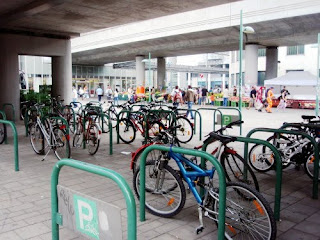 Bike racks at U6 Floridsdorf: subway and train station
and a big shopping mall are right beside the racks, which are even canopied!
Talking about it, other important spots for bike racks are of course public transport stations, especially train and subway stations. Vienna lacks many bike racks in these places as well as in front of schools and universities. But the city builds many new racks these days and is certainly improving, something that I can only appreciate :).

Still, the best and most bike racks ain't help if they are occupied by someone else. So I kindly ask all moped and motorbike riders: please park your vehicles somewhere else and don't block the few racks that are available for safe bike parking. 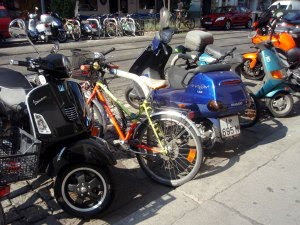 Thanks in advance.
Posted by anna at 5:21 PM

In Ireland ours are like those,they are called Sheffield Stands. We also have ones that we call Wheel Benders that are Low on the Ground that you are supposed to stick your Wheel into,but if you do the Vandals can Bend your Wheel. These ones are mostly outside Supermarkets and are owned by the Supermarket. A couple of Supermarkets one in Swords and one in Dunleary Dublin have a few Beautiful ones that realy Support your Bike when you have a Load of Groceries and are more Bigger and Stronger than the Official Council ones. But we Chronically Lack enough Bicycle Stands,there just is not enough in Dublin. They are improving the situation bit by bit and have Promised us a lot more. We also have the New Dublin Bike Vélib since September and it is extremley Popular with over 5,000 Subscribers but only 450 Bikes. It is being Run by the French Advertising Group J C Decaux who have Advertising Billboards on 5 metre High Metal Advertising Stands around the City. http:www.dublinbike.ie

The city of Vienna wants to build new bike racks, but does not know where. ARGUS Vienna is trying to help them to find appropriate places for bike racks.

You can make suggestions here:

Unitechindia is manufacturing, supplying all kind of Super Market Display Racks as well as Library and Magazine Racks. We are having latest designs of Racks including Steel Racks, Pallet Racks and all kind of Racks as per your store requirements.

Hi, do u have any idea about Racks manufacture?? just see here

In order to secure your bike on a roof rack you need to be able to lift your bike overhead, which can be quite difficult for some. Choose a trunk or hitch rack if you want easier access to your bikes.

Unitechindia is manufacturer suppliers and exporters

I go through your website it’s very good and having good information about the Heavy duty Racking systems Manufacturers, and we are also having similar website you can visit us.

Wow…!! It’s very interesting… I am really impressed with your post.. Thanks for sharing it..
Secured Bike Shelter Ontario

Wow…!! It’s very interesting… I am really impressed with your post.. Thanks for sharing it..
Combo Bus/Bike Garage

Hi! Nice blog .You have done a great job. Keep on working.Dero Duo-gard

If you want to Double decker bike rack for your bikes. You can contact us. Our expert will give advices as per your place.

Bike rack is important for every mountain bike rider. It is helps to carry your bike. Essential bike accessories.

This post is important and informative . Thanks for your lovely sharing.

Mr Benjamin went above and beyond their requirements to assist me with my loan which I used expand my pharmacy business,They were friendly, professional, and absolute gems to work with.I will recommend  anyone looking for loan to contact. 247officedept@gmail.com.WhatsApp ... + 19893943740.

Thank you so much for this information. if you want to buy Pallet Rack in India in bulk quantity, Visit MEX Storage Systems Pvt. Ltd. one of the best Modular Mezzanine Floor Manufacturer in India.

it is a good article thanks for sharing …