A new plus and a new minus in the 9th district

Since a few days I live in the 9th district in Vienna. Generally, it has a dense network of bicycle infrastructure -- a lot of bike racks and a lot of bike lanes. In fact, too many bike lanes. And some of the new ones in horrible positions: in the door zone, and on cobblestones. Who the hell plans something like that? Certainly not a regular cyclist... By the way, in Austria we have the law that any bicycle infrastructure available must be used, so on many such "bike lanes" I am forced to either ride illegal or unsafe. 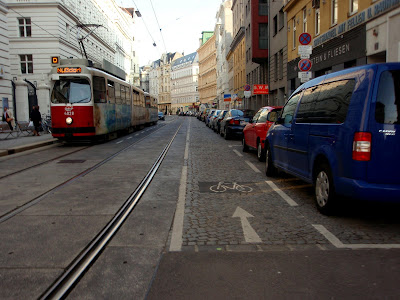 On the other hand, I can also report something good. Maybe you remember, that I once complained about illegally parked cars (aka parents) in front of schools, on the bike lane, and the sidewalk. Well, after seeing this many times, I finally wrote some Emails to one school and the city council. And well, within a few days a got a reply and within a month or so these pillars were built (very impressive and fast reaction :)): 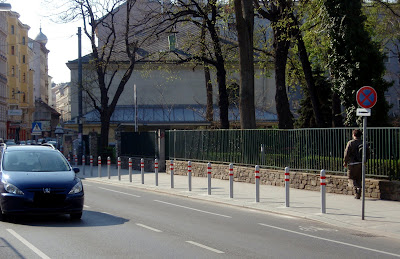 Such pillars are not exactly what I like (in fact, it's not on a long enough stretch and people still block the bike lane), but it's a start. I also hope that some parents will get the message and not just simply block bicycle infrastructure elsewhere.
Posted by anna at 10:12 PM

Hello Anna,We have the same sort of problems in Dublin with a lot of our Cycle Lanes in the Door Zone and Cyclists had to ride well out in case they got Doored in spite of the Cycle Lanes supposed to be Mandatory. The City Council finally recognised that they are not satisfactory and Dangerous even though they never forced People to Ride on them they finally gave permission for Cyclists not to adhere to the Rules . They did away with the Mandatory Rule that Cyclist are supposed to ride on them.

They said they hoped to update the Cycle Lanes and make them safer. There is a big Change in Attitude by the Council since 10 Years ago and they are anxious to Promote Cycling and have brought in a 30KM/H Driving Limit in the City Core,and even had Signs saying Drivers to watch out for Cyclists and Pedestrians on the Approach Roads into the City these last few Days.

We have Traffic Jams in the Morning and Afternoons with People Chauffeuring Their Children to School and they had to Ban them from Parking outside the Schools within a Distance of a few Hundred Metres either side of the Entrances. Most of our Roads that have Schools do not have Cycle Lanes on them it is only a few.

Because of our Bike Week coming up in June some Schools are having Promotions in early May to get the School Children to come to School on their Bikes,these are Secondary Schools for 11 - 15 Year Olds. They are giving them Training to stop them being afraid to Cycle on the Road and some Fun events like Picnics ETC.

SO, why do so many people have such enthusiasm for such things?

I bet your Paula with her balloon tyres will swallow those cobblestones. :)

Think of the cobblestones as protection from lycra-clad teeth-clenchers buzzing you as they speed past on their way to the next stop light.

I really like some parts of the 9th district, especially the Old AKH. But the residential areas (where several of my friends live) I find quite confusing to navigate - be it by bike, walking, or public transport. I have not yet encountered the cobblestone bike lanes though! How does your bicycle handle them?

Stuttgart has the same, I'm afraid. And we have tram lines like that as well. On the other hand I found drivers seem to be used to cyclists avoiding the door zone and riding outside of the white line.
Which was just as well really as it was physically impossible to fit a bike into the gap between car mirrors and the white line.

I also made some good experiences after contacting people from the local government. In many cases it really worked - things like inproving security for cyclists or new bike racks etc.

So the message is: don't be shy! Complain about what you don't like, and also wirte positive messages if there is something new which you find good.

Thanks to everybody for the comments. Hope things also improve in the places you live.

@ MDI: Yeah, Paula absorbs a little bit of the shocks, but not THAT much. It feels quite uncomfy and unsafe, especially when it rains and the cobblestones are slippery. I don't even want to know how it will be to cycle there in the winter (with snow and ice).