Parking offenders and a trip to the industrial area of Vienna

Today I just cycled to work and back. The round-trip is about 12km. Last Wednesday morning, however, I cycled about 20km extra. No, not for work. I went to the MA67 and back. The MA67 is the magistrate in Vienna responsible for parking violations. Why I went there?

About half a year ago I reported 13 cars that were parked on a bike lane, the sidewalk and in a "no parking and no stopping at anytime" zone. Right beside a school. They were parents picking up their children. One of these people filed a protest and I had to go to the MA67 for a witness report and to hand in a photographic proof.

Illegal parking on bike lanes is often just considered a trivial offense
20km just for that. Because somebody breaks the law, endangers other road users (in this case especially children, even worse) and does not even want to take the responsibility for that. How far would you cycle for justice?

Actually I usually don't do that. Waiting and reporting at the police station was very time-consuming. Sending in the photographic pictures was not for free and also costly in time. Even just cycling to the MA67 for a witness report cost me more than two hours. I just hope that the other 12 parking offenders don't file a protest.

However, this latter procedure is unfortunately always necessary if an offender doesn't want to pay. But I still found out about ways to simplify the process. At the MA67 they told me that I don't actually have to go to a police station and that I can simply write them an Email. So in case you get frustrated with parking offenders, I recommend the following:
There's also the website mybikelane.com where one can upload pictures (worldwide, based in the US), but it doesn't help much as nobody is reported and has to bear the consequences. Besides, it's controversial whether or not it's actually legal to do so in Austria. At least people and other cars in the pictures should be blackened...

Another alternative approach is to leave a note at the car driver's window. Maff wrote about an example in Linz earlier (available as pdf on graz.radeln.net). Similar German "stamps" can be ordered via Umkehr und Fuß e.V. 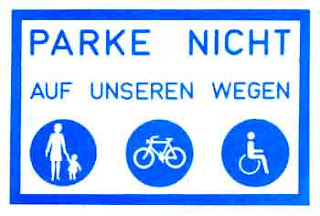 "Don't park on our lanes/paths"
Do you have experiences with parking offenders? Arguments? Made any reports to the police?
Posted by anna at 6:25 PM

Well done! I'm confident that your efforts will pay off.

I'm afraid there is no point in reporting parking offenders - police just doen't care. I can see dozens of people parking on bike lanes every single day. And police is just driving by and doesn't give a shit.

Sorry about all the trouble you had to go through to get this sorted, but glad to hear there is an easier way over email. Maybe I will have some fun with this when I am next in Vienna (Feb-March). This time I think I will have a permanent bike, too!

PS: When is your Retrovelo arriving?

Bike lane parkers are so selfish. Who can possibly think that highly of themselves? Nothing is ever done about the problem in Chicago that I can see.