Watching the new neighborhood from above

I am sick these days and stuck in my house with a bad internet connection. So what should I do in a half-furnished flat apart from lying in bed? Well, let's have a look outside the window: 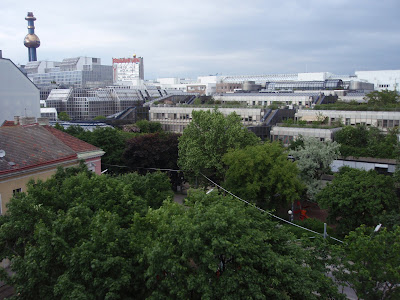 This is what I see from the bedroom window. In fact that's quite a strange view for Vienna. The unusual thing is the view as such (no house opposite that's blocking it, to be precise) and the amount of trees. By the way, the funny-shaped golden and blue thing is the chimney of an incineration plant.

Nearby there are also a lot of restaurants, garbage cans and bike racks. Yah :-). 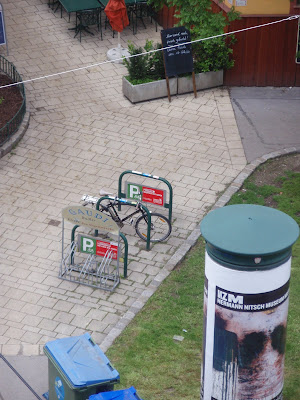 Ok, that get's boring after a while. So let's move on to the street. Not so boring, cause there's a tram stop right on the other side of the street. And a building site. And around the building site there are "no go" signs and diversations for the rest of the traffic which can't drive on rails. A few days back my better half observed one of those smartypants in a car that ignored this warning and hence landed in the ditch. I haven't seen that myself, but I see a lot of cars and cyclists that think they can just follow the tram and be alright. Some get very confused when they find out that they can't. Well, some road signs do make sense! 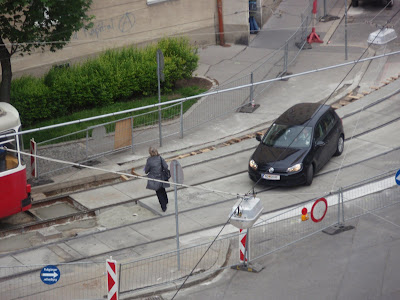 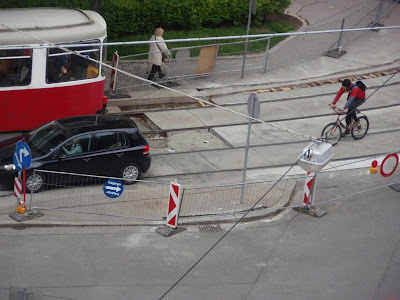 What do you see when you look outside the window?

Apart from that I hope that I will get well soon so that I can participate in the LGRAB Summer Games. My mind's already set for it :-). Great idea, girls!
Posted by anna at 6:14 PM

Wishing you a speedy recovery.
From the top floor windows (two different sides of house)of my home I could see two colourful children play-grounds with roofed sitting areas for parents /house-maids.

There are two fenced-in brick-red tennis courts for public use - managed by the community centre. From the front (balcony/veranda) I could see a broad 'ribbon' of turquoise/teal-blue sea bounded by the horizon on the far-side and a parkland of 'huge tree tops on the near-side.
Besides these are a few tree-lined terraces/lanes ; I just love to 'spy'(... sometimes with the 'help' of a pair of binoculors :p ) on road users (cyclists, pedestrians and motorists passing through/round or into the 'housing estate'. I love the serenity (quietness and verdure) of this place.
L.

Wherever you live a good view is important.Someone even wrote a Book about it/ A room with a View/about Venice I think it was. It is nice to see a load of Greenery from your Window and some of the Buildings seem to have Roof Gardens. This is a Modern Phenomenon in Appartment and Office Buildings that I like,it gets away from the Monotonous Grey Concrete of a Modern City Skyline.

All the Restaurants and Café's are a further Bonus with the Smells of Food and Cofee wafting through the Air when you open your Window and also the sound of Happy Laughter from the People below either in the Café's or else Strolling across the Square. It seems very Idylic,you are lucky to have found such a nice Location.

I myself live in Surburbia surrounded by two Storied Houses with nice Gardens and when I look through my Rear Bedroom Window I can see Trees and Gardens for 500mtres in a big Circle. It is very nice,I can sit out on the Porch and have my Meals if I want to, I also grow Vegetables.The Garden is the best Feature of the House.

I hope you get well soon and get out on your Bike since the Weather is so fine,we seem to be having a minor little Heatwave for a few Days anyway up to 25C then back to the normal 14Celsius next Week.

From my 3rd floor apartment I can see trees and lots of them! There's a one level building and a field across the alley from me, it used to be a school There's even a play area left for children.

In the distance on the hills, I can see our local University, UNBC, quite clearly. It is even more nice when you see it at night all lit up. I am so lucky that I have no tall buildings on my side to block my view! (that's why I picked this particular apartment when I moved in)

Sorry to hear that you've been sick.
But the view is nice!