FEEL FREE! -- Advertising cycling and why I still don't like E-bikes

Lately I have seen some billboards with bicycle ads. In fact, the don't advertise bicycles in the sense of bicycle brands, but cycling as such. There is, for example, the Citybike Wien ad which obviously aims at young people: 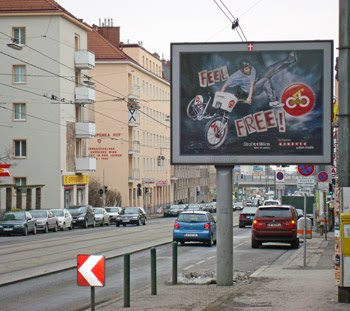 This picture is from an article by the Greens in Simmering.
In contrast, there is the Wien Energie ad about E-bikes: 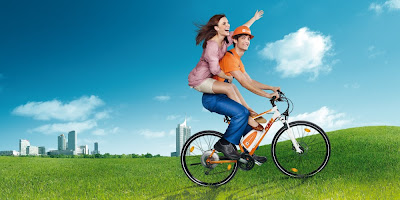 More about the E-bike test on the Wien Energie website
Nice picture, but in my humble opinion, there's too much of a hype about E-bikes these days. Ok, they do make sense for old and disabled people, parents who daily transport their kids and shopping by bike, etc. For the average person, however, they are pretty useless. Not just that they are expensive, they are also slow (with the battery one can only go 25 km/h, which can be easily achieved without one on a lighter bike) and ugly. E-bikes for "business people"? Well, if you dress correctly and drive in a reasonable speed, then you really don't sweat that much. Men in suits and women in dresses cycle up and down the Gürtel bike path in Vienna every day. And although it is quite hilly, none of them gives the impression that they have to put in a lot of effort...
Ok, to be fair, it requires a little bit of "training" to find out which clothes are comfy to wear (meaning, that ones has to get used to dress according to the temperature and weather in general) and how to ride efficiently (speeding in the city is useless because it just means that you'll have to wait longer at a red light), but there's no difference between E-bikes and other bikes. Well, if you still feel that an E-bike is something that you need, let me know why. Maybe I just overlook the obvious.
I probably shouldn't be so negative about E-bikes. After all, E-bikes are better than no bikes :-). And to be precise: I actually do like the idea of E-bikes. Just not they way they are advertised (namely with the wrong target audience in mind).
What do think about E-bikes? Is there much demand for them where you live?
Posted by anna at 2:27 PM

Just across the water in china, they are booming...Ebike manufacturers there are doing very well...but I share your concern about the hype, the place they eventually take in the west is still to be worked out.

We have a few here and as this is a very hilly area I think that's a good thing as it is getting more people cycling. On the other hand, as you say they are pricey.

I've only seen one E-bike being ridden, but I think they are a nice addition to the bike world. 25kph is a pretty good clip for a utility cyclist...

Are there a lot of advertisements in Vienna that are in English or partly in English?

Selling like hotcakes here in Holland. But remember that we keep cycling into ripe old age and that although the country is flat, it's also open and there is always a strong wind blowing the wrong way.

I didn't really "get" e-bikes, either. But Catherine of Freckled Diaries has one (in addition to a regular Dutch-style bike) and offered an interesting explanation here.

Have you ever tried one? I rode a trike with an BionX on Fahrradmesse Essen and found it very impressive.

Personally I would not buy a motor, my commute is my workout. Fahrradzukunft had a review of e-bikes. Although sceptical biased it is interesting to read:

Adding to my comment at 7:58 PM: I have a sister who is 58, a diabetic so overweight, has had a hip replacement and her knees are gone. As she is a librarian like Catherine of Freckled Diaries, she has never been able to afford a car, and bicycles have always been her only way of transport. That, dear Anna, is the category of people for whom an e-bike is a godsend. She bought one last year and is very happy with it. I wish people would stop thinking of bicycles as sports equipment.

You wrote "E-Bikes". In Germany, E-Bikes are Bicycles, that run up to 45 km/h. The Bikes you mentioned are in Germany called Pedelecs (up to 25 km/h). So you get two different types. One for people, who only need "slow" speed and one for people, who want to move faster. Have you ever seen this: http://www.grace.de/ ?
Just another kind of advertisement, isn't it? Ok, a Grace is a special kind of E-Bike, but it shows the state of the art right now.
I'm very much interested... let's see, what will happen the next years.

Thanks a lot for your comments. Just to clarify things. In Austria, E-bikes (or Pedelecs) are only allowed a max. of 25 km/h, otherwise a proper drivers license is needed (like for mopeds or motorbikes). I agree, that an average of 25 would be pretty good in the city, but as a maximum I don't find it that impressive. I don't think an E-biker is faster than a usual biker.

But as Frits B points out: For people with handicaps (or disabilities, old people etc.) an electric support does make sense. No doubt about that. Strange enough, most of the campaings don't aim at such people.

PS: I'm now planning to test ride a Pedelec in the future, in order to really understand the difference.

@ Ryne: Some of the campaings are (partly) in English, because they think it sounds "cool" for the younger generation. There is a lot of weird German-English mix generally.

That's interesting. So does that mean german isn't considered "cool"?
Thanks a lot for your fantastic postings.
-ryan

@Ryne: no, but english insn't, too. Many young people can't really read or understand english, so they prefer another kind of language: "denglisch". This is a composition of the german words "deutsch" and "englisch". An example?
"Biken ist echt cool" (bicycling is really cool). That sounds better than "Fahrradfahren macht wirklich Spaß".

Thanks BikeBlogger, I'm a linguistics and foreign language major in college and that was interesting to know.
-ryan

Gosh, everywhere I see articles about ebikes (or whatever you want to call them) they really divide opinion down the middle. I guess if it gets people out of cars and onto two wheels it's better than nothing, right? I just hope that the migration works that way, as oppose to cyclists abandoning their bikes in favour of the ebikes...

Regarding adverts, there are some great ads out at the moment featuring bikes but selling products that are nothing to do with cycling - Lacoste's current campaign springs to mind. The best thing about this is that it is positioning the bicycle as mainstream and gtetting the bicycle exposure outside of the usual cycling circles. Let's face it, any PR that paints cycling as fun is a good thing when you consider the usual media coverage cycling usually gets...

I understand the usefulness of e-bikes for people who, for whatever reason, are not physically capable of cycling but would like to. But e-bikes are not interesting to me personally. For me, the whole point of a bicycle is the independence it gives me. I enjoy feeling the direct connection between my movements and the bicycle's movement.

I'm not personally interested in e-bikes, but I've picked up a great deal more appreciation for how useful and fun they could be for the right rider. I rode one for an hour and found that I felt much safer being able to accelerate at a rate similar to cars when starting after a red light. More than this, I found the ride a great deal of fun. You can read the full account at http://mikespokes.blogspot.com/2010/05/electric-assisted-smiles.html

At THE JUST BIKE LIMITED, we’ve made every effort possible to find the best bikes available today, and we’ve done just that. With a wide variety of bikes available from Specialized, Argon18, Scott, Giant, Cervelo, Litespeed, Trek, Pinarello, Santa Cruz you can be sure your legs will let you down well before your bike will. We spec all of our bikes with quality parts from Shimano, SRAM, Ultegra and Campagnolo and also offer fully customized frameset builds. Your dream bike is within reach at THE JUST BIKE COMPANY LIMITED.

Here are some of our best offers.

E-bike cost is also dictated by the quality and type of normal bicycle components that come with it. The cost of those components can vary wildly, which is a large part of the reason overall e-bike price ranges from right around $1,000 on the low end to $15,000 on the extremely high end. also see electric bike expensive