The Swiss approach to cycling

Before Christmas I spend a day in Zürich, Switzerland. To be fair -- I did not go there by bike (but by night train from Vienna) and I did not even cycle there. But I have lived in Zürich for a while in 2008 and commuted by bike every day back then. Thus I'm not a complete greenhorn when I talk about cycling there :).
I could write a lot about Zürich's bike infrastructure because there are many things I like about it. However, I already mentioned a few things I like earlier (see "Commuting in Zürich"), so I'm going to tackle different topics today. 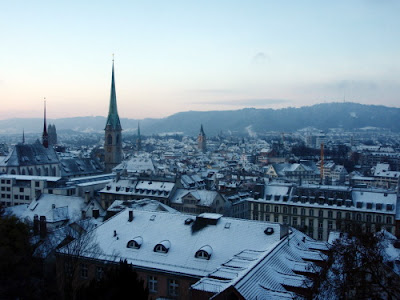 Early morning view from the ETH terrace in Zürich
Let's start with bike parking facilities, one of my favorite things that I always look out for when I visit foreign places. In Switzerland, and especially in Zürich, they have typical bike racks that I haven't seen anywhere else, namely something that I would just call semi-hangers. The "hanger" is pretty obvious cause the handlebars are lifted and hung on a metal hook. The rear wheel, however, stays on the ground. That's where the "semi" comes in. Additionally -- and that makes that kind of parking really safe -- there is a thick looped cable attached to the each such hanger.

Another very typical "Swiss thing" is the so-called Velovignette (velo = bicycle). Many people in Austria (and probably also elsewhere) mistake this with a number plate, so I'm going to spend some time elaborating what it really is. It's not at all a number plate although, of course, it contains numbers. The little sticker is simply a mandatory liability insurance for cyclists covering third-party claims of up to 2 million CHF. It has to be replaced every year (indicated by the largest two digits one the colored background), lasts from the 1st of January to the 31st of May in the following year. Since every Swiss cyclist has to have such a sticker, the insurance is really cheap -- it costs about 6 CHF (that's only 4 € for more than a year!). The SBB sells it here. 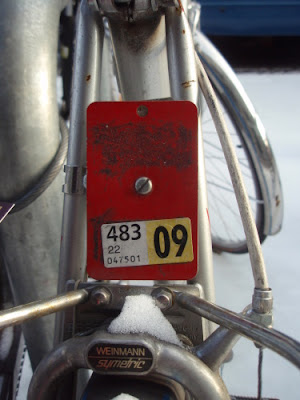 Swiss Velovignette for 2009
For little extra money it's possible to register the number of the Velovignette (otherwise nobody knows who bought or owns it, which makes the "number plate" argument sound even more ridiculous) and to thereby obtain an extra insurance, e.g. against theft. On the other hand, to prevent theft of the vignette itself, it is recommended to place the sticker at a hidden spot on the bike. People that are caught without a Velovignette have to pay a fine of 40 CHF (about 27 €).

Summing up, I have to say that I really like the idea of such a mandatory insurance. It's the obligation that makes it affordable for everyone. And everybody can cycle without having to worry what happens in case of an accident.

By the way, visitors from abroad don't need a Velovignette, but since I spend a few months there I also got one for my bike. Generally I'm anyhow well-insured (through a liability, accident and legal protection insurance). How about you?

Finally, although these are pictures from last year, I wish you a happy and safe year 2010! Cycle on!!!

Interesting about the Velovignette. But I wonder, is compulsory third party insurance really necessary for cyclists? I think data suggests otherwise. In Sweden in 2002, two thirds of cyclist fatalities involved a motor vehicle. However, only 0,3% of traffic fatalitites among non-cyclists involved a cyclist. There is similar data from the UK and I assume it's the same in Austria and Switzerland. See graphs: Ecoprofile: Krockar trafiksäkerhet med miljöhänsyn?

Clearly, while cyclists may be an annoyance, they do very little harm to others. I think the Wikipedia entry sums it up nicely: "Wenn beispielsweise ein Velo ein Auto streift und den Lack beschädigt, so bezahlt den Schaden die Haftpflichtversicherung." I don't feel paint scratches are a good enough reason for compulsory third party cyclist insurance.

Oops, forgot to link the Wikipedia entry I mentioned:

Interesting. I'd never heard of mandatory bike insurance. It must be nice to live in Europe and be able to visit other countries so easily. Thanks for sharing your travels with us!

You didn't go to Switzerland by bike? Shame on you : )

While I don't like the idea of "mandatory" anything, I admit this insurance system seems like a good one. In the US I am fairly sure that my medical insurance covers injuries sustained in a cycling accident (knock on wood). I know that some people have car insurance or home insurance that also covers bicycle theft or damage, but I do not have such a thing.

If the annual premium for this liability insurance is only 6 CHF the cost of the vignette alone may be more (production, postage, registration). Looks like the Swiss are a bit too gründlich in this respect.
Just for comparison purposes: in Holland, as far as liability in traffic is concerned bicycles are covered by the usual household liability insurance (the one that covers falling slates from the roof on the heads of passers-by or people falling down stairs inside etc.). Only few people don't have such an insurance; I suppose it compares to Haftpflichtversicherung. The bike itself can be insured against theft or damage on a home insurance policy. If it's an expensive bike you can choose to insure it separately - my pens are. Mopeds on the other hand must like cars carry liability insurance and have vignettes Swiss-style accordingly; the premium is quite a bit more than 4 euro, however.
Before WW2, 1924-1941 to be exact, we had a bicycle tax just like the road tax for cars. Bikes got a metal disc, or plaque, fixed to the frame; a picture of the later version is shown here: http://www.wo2verzameling.web-log.nl/wo2verzameling/2008/03/fietsplaatje-19.html. This tax was abolished because the revenue lagged far behind the cost. Apart from that the tax disc was rather discriminatory. Bike owners on a low income were freed from paying this tax but got issued a vignette nevertheless - one with a hole punched in it, so poor people were instantly recognisable.
@Dottie: Grab a map. Chicago may be further away from your home town than Vienna is from Zürich :-). And Austria and Switzerland both speak German, of course. Plus that within the EU we have no borders anymore.
@Filigree: The insurance Anna refers to is the one covering the damage you might do to others with your bicycle, in particular the legal cost if the opponent sues you. Very useful, but you are right in thinking that making it mandatory is perhaps a bit over the top.

Fascinating, thanks for the great info. I have been in Zurich for a few days. Of course I rented a bike to examine its urban design. Just brilliant and beautiful.

I was wondering the rational behind the hanger parking, thanks.

Insurance against theft would probably be useful in the long term.

Mistakes you might ever make in your life. Household insurance - an imperative, not a whim. Should your hearth and home, together with its expensive contents, be permanently damaged or even destroyed by fire or flood, could you rebuild it from scratch with your own hard-earned cash Trucking Insurance

Thanks for sharing this.i would like to sharing this special one well done.Good Job Thanks again..

I constantly emailed this site post page to all my friends, because if prefer to read it then my all friends will too.auto insurance quotes

Thanks for sharing such useful information. Please keep sharing more!

Thanks for sharing this great information.

It is great to have visited your website. Thanks for sharing useful information. And also visit my website about health. God willing it will be useful too

Thanks for sharing information.