A question of balance 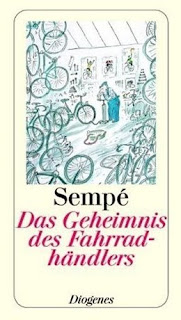 Actually, on the trains from Spain to Vienna I couldn't cut my videos cause all the trains (except the night train) didn't have sockets and my laptop was shortly dead. Instead, I read my new book again, "Das Geheimnis des Fahrradhändlers" (the secret of the bicycle dealer) by the cartoonist Jean-Jacques Sempé. It was masterly translated to German by Patrick Süskind whoose book "Perfume" you might know. The original French title of Sempé's book is "Raoul Taburin". I don't know if it's also available in English and other languages, but I guess it is.

Anyhow, the book is about a famous bicycle dealer that can repair all kinds of damages and is therefore highly regarded in his village. He has a secret though -- he can't ride a bicycle. First he tries to avoid bicycles and comes up with all kinds of excuses, but at one point he can't keep out of harm's way anymore..

I won't tell more in case you want to read it yourself. It's a nice little book though, more like a fairy tale with lovely cartoons and therefore also suitable for children.

It made me think too. I have many friends in Vienna that don't own a bicycle and who, according to themselves, can't ride a bicycle. Maybe they learned it as a child, but they never cycled in their teens and later.

But it's not a problem if you can't ride a bicycle, cause you can always learn it!

There are two simple steps:
The first is just a matter of training. I remember that I had training wheels on my bike when I learned it at the age of 3. Nowadays, this seems to be not the preferred method anymore. Here, the Puky learner bike is state-of-the-art for children. Choose a park or a quiet area where cycling is allowed. Sometimes it's handy to have a second person that can hold you in the beginning and give advice. Read also how to ride a bicycle (but please don't consider the things they think you need -- they only constrain you).

For the second step, make sure that you know the traffic regulations well, especially if there are exceptions for cyclists. It's generally not enough to hold a driver's license, cause for that you only had to deal with car-related regulations. As there's much less traffic on weekends (especially on Sundays) it's advisable to start riding in traffic then. Assure that you already feel confident with braking and hand signaling before you hit the road though. You may also want to read an earlier post of mine about positioning on the road.
Posted by anna at 12:24 AM

I think there is a big mental hurdle for many people to overcome, so showing them what's involved in cycling and demonstrating that it can be done, is very important.

Hi anna! Would you lend me the book, please?