Beep! Beep! Apart from left-hand traffic this is the first thing one notices after coming to India. It’s the cars, autorickshaws and motorbikes blowing their horns on the crowded roads. Unlike Europe, however, this noise level does not indicate stress or anger. People honk for various reasons -- before and while overtaking, to indicate a turn, before stopping or changing lanes. 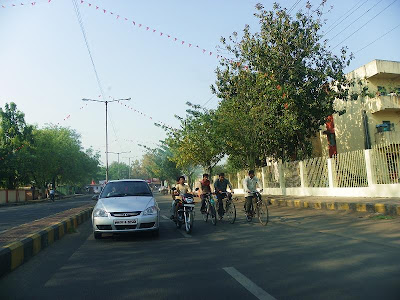 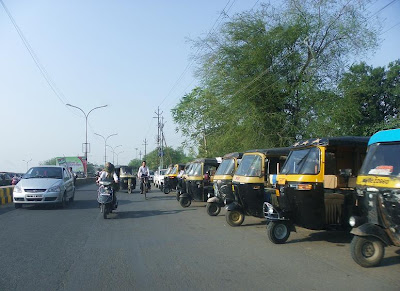 The main roads here in Nagpur are quite wide. More than 5m in each direction are separated by a small concrete wall. There are not many rules (or at least nobody cares about them), but the “law of speed” applies. On the very edge of the road there are stands, huts or garbage. Cattle, street dogs and pedestrians walk there, cyclists come next, then autorickshaw, motorbikes and cars. By the “law of numbers” cycling seems rather safe -- even at night, although the bikes don’t carry any reflectors or lights. Safety is also neglected by other transport users -- cars don’t have many safety belts (and if so are mostly not used), motor bikers rather carry their helmets on the arm (if they have any) than on their head… 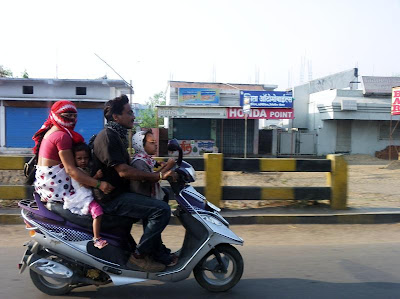 Bikes are mostly used by poor people and schoolchildren. The majority of bikes is old, black, heavy and single speed. 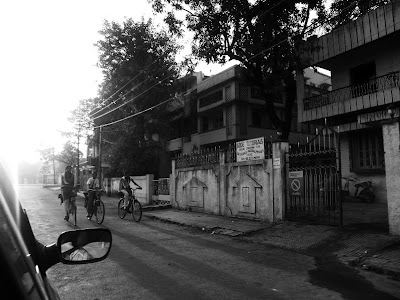 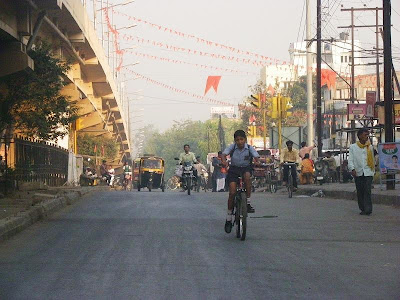 What I really like is that women even cycle in colorful saris. I have worn a sari too, but I’m not comfortable enough yet to walk (or even cycle) on the street in one. 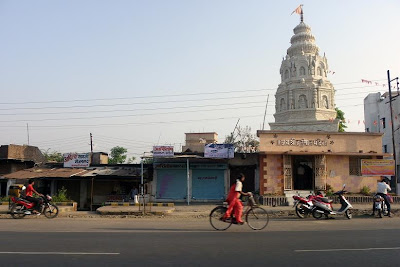 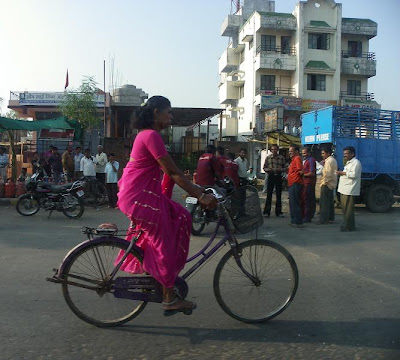 We mostly get around by taxis or on foot and visited a park, a few Hindu temples and Muslim shrines and shopped a little. During the day temperatures of 40°C are already reached. I deeply respect all the people here who do their work in this weather. Even in a light kurta I prefer going out early in the morning or in the evening. A lot of the daytime is devoted to sitting or sleeping under a fan -- timepass, as they call it here :-).
Posted by anna at 10:01 AM

Their traffic culture is so different from ours. It sounds very chaotic. There must be loads of traffic accidents all the time, like in Russian cities. BTW, they don't use much bikes in cities in Russia. Apparently they wanna show off and drive some sweet mercedes in stead. Plus they don't have bike lanes, and traffic laws are apparently more like recommendations...

BTW, here in Finland school kids also use bikes. I'll get some photos of their bike racks, which are full during the day. I love the picture of the lady cycling in sari!

Anna, can you please-please post pictures of yourself cycling in a colourful sari! Otherwise I will have to make you do it in June in Vienna : )

I am glad you are enjoying your trip. Your pictures are so interesting, do keep us updated.

In the meantime a lot has happened in Vienna in your absence. I have a bike and ride it to work, and elsewhere every day. And tomorrow I am going... to the velodrome in the Prater! Okay, so it still is not as interesting as India. But I wish you were here!

Thanks for your comments :-).

@ Velouria: I do have a sari (a too nice one to be worn daily), but no bicycle. And I wouldn't feel very comfortable to move around on my own as I'm probably the first white person people have seen here. Maybe in Vienna :-).

Re schoolchildren: I have a friend in Vienna who used to cycle with her young son... Until they got hit by a car that turned right on red without stopping. After this, she no longer allows him on a bicycle unless along the Donauradweg. I have heard similar stories from other mothers in Vienna: "maybe it used to be safe, but not anymore." This contradicts the stories people tell me about how Vienna was much, much worse for cycling 10-20 years ago than it is now.

Great thoughts you got there, believe I may possibly try just some of it throughout my daily life.
Used Bikes in India