Hello everyone! Sorry that I've not been writing much for a while. I'm writing my bachelor's thesis and it takes all of my energy, and I don't feel much like writing anymore after 8 hours of typing and stuff. So, today I'm just posting some images of bikes and cycling in late winter and early spring. At worst/best we had about half a meter of snow. This shot was taken in February. I just love it how the snow piles up on the seat during the winter :) 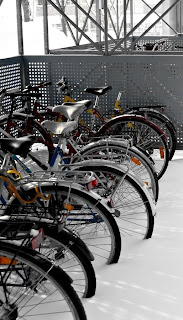 This is one of the bike racks on the front yard. They are covered, but still snow and water blows in the shelters. Also there is no way to lock your bike to anything solid, unless you have a really long wire lock like the one in the image below. There are bike racks where you can lock your bikes but unfortunately my bike is incompatible with them. In this part of the studet village there's no locked shelters either. Note the last bike without a seat. Such a fun ride :D 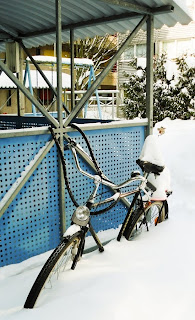 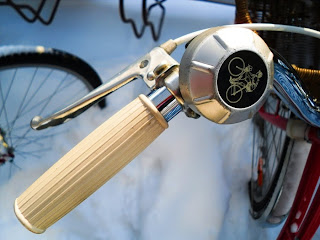 A little detail of my bike. 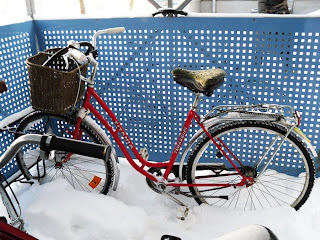 And that's my sweet ride :). She's very cosy at that particular corner. 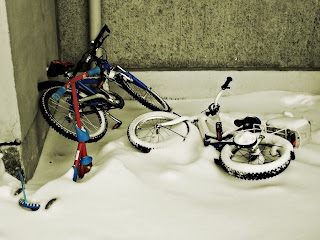 Neighbours' kids' bikes. I love kids' bikes, they are sooo cute :) Even though I'm not a big fan of kids themselves. The one covered in snow is actually a police bike: it's painted in white and blue just like Finnish polis cars and it says "police" on the side 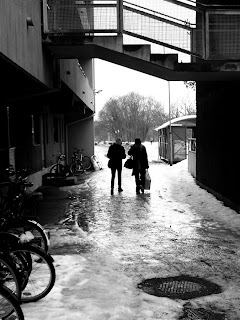 This shot is taken in the end of march. In the spring you get the worst road conditions of the year. During the day the snow is melting and it turns into slosh or water. Then during the night, it freezes again, sometimes in a smooth surface, sometimes in rough forms. That shiny surface is the smooth version with a thin layer of water on top. It is very difficult to walk on such surface. Cycling is possible, is you have studs. You can see that there's gravel on the road. In these conditions it does absolutely no good. Gravel is dark, and dark bodies radiate more warmth than white bodies. This means that every little stone soon melts its way through the ice, and so the gravel ends up underneath the ice, not on it. When you walk there it looks like there was gravel, but there's not, so it makes it even more dangerous. Those people in the pic are walking very carefully... 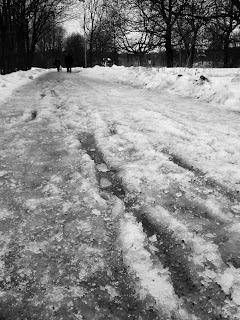 Now this is a very nice example of the spring challenges that even anna would appreciate :) (She takes rough conditions as a challenge. Very good attitude!). So, this is what happens when slosh freezes. You get really rough and dangerous patterns on ice. This is easy to walk, because it is not that slippery, but I wouldn't venture there with high heels! For a cyclist this is bad, you can imagine if you ride in on one of the deep tracks. However, it is much easier to manege this when it's still frozen. During the evening, when its all slosh, it's veeery challenging. Actually the worst conditions that I've experienced. Loose snow or sand is nothing compared to slosh. I can't really describe what it feels like. Maybe a bit like if sand was slippery, if you can imagine. Studs are absolutely no use with this, what you want is really thick well patterned tires. You really have to control your bike well if you are venturing there. One tiny mistake and you're down. And it's no fun at all to be covered in dirty slosh. This was taken a couple of hours ago, and its snowing now. So, fresh snow on this makes it even more fun :P 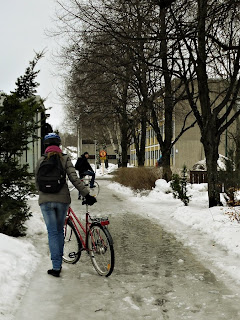 And here's one more fun example. So, there is bumpy, but slippery layer of ice, on top of which you get a thin layer of water. Here's a little lower part of the road. There's like 10 cm of clear water underlayed by ice. You can't really see the patterns on ice even when the water is clear when there's a lot of it. This means that you have to make a choise: risk falling down in an icy pubble or walk you bike and get wet feet. The boy chose the first choise and survived, and the girl chose the second one. I heard her say "no way I'm riding through that!" even thoug the boy had shown a good example. Well, I probably wouldn't have gone through that either...

So, my winter riding experiment is soon ending, because the winter is gone soon. I have learned to ride my bike a lot better than before and interpret the varying road conditions. I have learned to ride in blizzard and deep slosh. Also, now I know how to take care of a bike that is in winter use. This winter has been the most beautiful in a decade or so, and I'm very glad to have experienced it on wheels. And a tip for those that are considering of venturing the roads next year: now is the time to buy the studded tires! They are one sale, and I've seen them up to -70%.

So that's it for today! Happy spring time!
Posted by Sonja at 3:17 PM

Absolutely interesting to read about such different conditions than those we have in Barcelona! As a Mediterranean girl, all this snow in March, studed tires, ice and gravel sounds like something very far away, and it amazes me :)

Thanks for sharing and enjoy spring when it comes!

Lol, you got it wrong Anna! March is the spring :D (P.S. Sorry about the typos, I didn't read it through as well as I should have)

hi sonja, good luck with your studies. i like the lovely photos and nice memories from Turku, the city of Pavo Nurmi!. i am out of cycling for a month after crashing with my bike and smashing my wrist!
Pablo - Malta

Wow, the icy tracks in the picture certainly do look challenging. I don't like such conditions at all, but then it might be easier with studs (have never tried those). I did, however, ride on sand once. Very interesting balancing exercise, but hard work :-).