As I already mentioned last week, I'm currently attending a Mobility Week Workshop in Budapest, Hungary. It's a meeting of 30 young Europeans from basically 6 different countries (Austria, Czech Republic, Finland, Italy, Hungary, Spain). After exploring the city center and area around the youth hostel Casa de la Musica, we will set different goals and work on how this area could be improved mobility-wise. 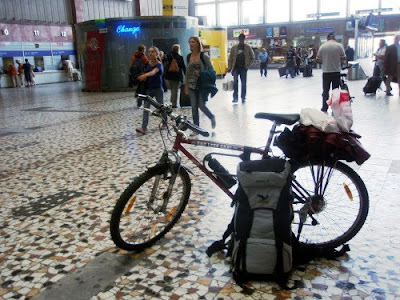 My bike impatiently waits for our departure at Wien Südbahnhof
I. (another girl from Vienna) and myself brought our own bikes along. Unfortunately, this is unnecessarily complicated since bike transport is only possible on the slow regional trains. Apart from the longer traveling time (4 rather than 3 hours) this also includes also other disadvantages for cyclists. For example, we had to change trains twice and always drag all our luggage and the bikes up and down the stairs at the stations (no elevators, not even rails on the stairs for wheelchairs – how do disabled people manage that?). Apart from that we didn't arrive at the main station Keleti in Pest but further outside at the Deli station in Buda. 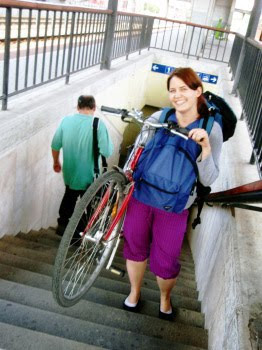 I. at Györ station: changing trains means draging bikes and luggage up and down the stairs
Such things really annoy me. I don't understand why they discourage people to bring along bikes on long distance journeys. I think the EU should really try to work towards a excellent train network that includes possibilities for bike transport. Nowadays it's almost impossible to bring bikes (except folding bikes) on long-distant trains and the situation actually gets worse and worse, at least in and around Austria after the Austrian railway network ÖBB introduced their new Railjet trains that simply don't transport bikes. Such things just make me sad.

So, after all, how is cycling in Budapest? Before we left, we heard all kinds of stories basically saying that cycling in Budapest is very dangerous and that car drivers are aggressive. I must say that I didn't have that impression at all. Of course, there is a lot of car traffic. The roads and lanes are wide and the motorists get priority over everybody else. But cycling in traffic is not so bad. Car drivers leave a lot of space to the side when overtaking and nobody ever honked at us. With all our luggage (both of us had a 50l backpack and a small one) we found our way to the hostel easily and safely. We only had a problem once after we got on a bike path as this one actually lead us away from the Erzsébet bridge rather than onto it. So we ended up carrying our bikes up and down stairs (again) and crossed the Danube on the sidewalk of the bridge. Well, the view was great and we took some nice pictures :-). Though our first cycling trip in Budapest was actually quite pleasant.

Night view from Erzsébet bridge to Buda, Danube and Pest
The next day we cycled through Budapest on rented bikes from Budapestbike in the whole group of 30 people. That way we could see some of the bicycle infrastructure in the city. There is not much and of course there are many improvements that could be made. Compared to Vienna, however, I quite enjoyed that the bike lanes on the road are so wide here and even have an empty space between the parked cars (absolutely necessary and should be standard anyhow, but Viennese planners apparently don't believe in "dooring"). I didn't like the segregated two-way bike paths so much as they are quite narrow and not so visible from the car lanes (always problems with cars turning right that only see cyclists at the last moment). Still, I liked their clear and straight design and that they had a center line. At some places the surface was quite rough though. Very often the bike lanes are painted red at junctions, but the color already faded away.

Cycling in Budapest: cycling in traffic, on a bike lane and a two-way bike path
What I really miss here are one way streets with contraflow cycling traffic. That is something that works very well in Vienna and that really safes me a lot of time in everyday life. They do try to implement such things here too. As mentioned in one of the talks, they also have one advanced stop lane for cyclists (meaning that cyclists can stop in front of the first row of cars at traffic lights, also referred to as 'bike box') and so-called suggested cycle lanes (simply bike pictograms on the road with no real bike infrastructure – I reckon that they are much more efficient than small signs beside the road saying that this is a bike route, as these are not really seen by car drivers).

Concerning bike infrastructure (and generally traffic and spatial planning), Budapest still has a long way to go, but cycling is possible and safe if one is cautious. Cycling, however, is certainly not pleasant here. Still, cyclists in Budapest already represent 3-5% of the modal split which is quite similar to Vienna (as far as I know we have 5% cyclists, but already 8% in the “summer months”), and the numbers are continuously increasing.

More about other aspects of traffic in Budapest and a flashmob by “radical pedestrians” at the Blaha Lujza square in the next post. Stay tuned.

Information of the whole idea and activities in the Mobility Week Workshop on the official website: mobilityweekbudapest.eu. Have a look at the project diary.
Posted by anna at 10:40 AM

It's great to get first-hand information about how cycling infrastructure is growing in Europe.

I hope you enjoy your stay in Budapest and keep us up to date with your group discussions.

BTW, the picture above the Danube is great!

Very nice photos and encouraging info about cycling in Budapest. I have not been yet, but maybe later this year or in Spring 2010.


I have been cycling in Budapest for some time now, and I can not really recommend it (but, of course, I go by bicycle every do, since even I do not care about my own recommondations - daily cycling is just necessary for me).

Appearently you stay in one of the bicycle-friendly districts of Budapest (VII.? VIII.?), where they do have some cycling infrastructure. But, for example, as mentioned in your report: there is NOT A SINGLE possibility to cross the river Danube by bicycle in the whole center of Budapest - on all the bridges it is either forbidden or extremely dangerous.

Also, in whole Budapest (except a few districts, like VII, VIII, as mentioned before) there is hardly any possibility to park your bike. This is also a problem in Vienna, but I guess that the number of bicycle parking spaces in Budapest is probably 1/100 of those in Vienna.

Finally, I do not have the feeling that car drivers respect cyclists.. Many of the streets in Budapest have 2 or more lanes in every direction, which means that car drivers can overtake all the time (and do not have to wait, like on a street with just one lane, for a good possibility) without leaving any security distance.

Conclusion: Cycling is great fun, everywhere in the world. But it is definitely much more fun in Austria, Germany, etc., than in Budapest.

Anyway: have a good time in Budapest!

Hi Anonymous, thanks for the insight. Yeah, we're are staying more or less in the center. The bridges really seemed like a big problem, and imho also the fact that one way streets are not legally open in both directions for cyclists. That would be a great opportunity for short cuts for cyclists, and also to bypass heavy roads.

There is exactly ONE one-way street in Budapest that I know, where "contraflow cycling" is allowed (if you want to take a look at that: Varsanyi Iren utca, near Moskva ter, between Bakfark Balint utca and Csaloganyi utca, lenght: approx. 100 meters).

A big problem is also, that many things are promised by the city gouverment (to keep cyclists quiet), and then the promises are broken - this happened several times in the past. Cyclists do not trust in the local gouvernment anymore. Also, it seems that a lot depends on how bicycle-friendly the head of the district is (and not on the city major, who is definitely not), since in a few districts the cycling infrastructure is fine, while in many others it is terrible.

I have actually that street on Saturday ;-). Well, unfortunately cars have priority everywhere. They rather allow parking on sidewalks than contraflow bike traffic (it seems to me). Of course, the political reasons are unclear for me, but I can see some parallels to Vienna. We also have districts that promote cycling and construct infrastructure while others don't care. There is an overall "master plan for traffic", but nobody takes care of the implementation... It's a slow process. Hopefully your streets in Budapest will be reconstructed while all the construction works are going on.