Despite cycling photography is another hobby of mine. Well, I do a lot of pictures with my cheap digital camera, but so far haven't bothered much about taking quality pictures (I'm actually more into analogue photography which is not so good for snapshots). But I do like other people's pics :-).

First of all, there is the Copenhagen Cycle Chic blog with lovely pictures from the cycling capital in Denmark which most of you already know. I also really enjoy the photos on Change Your Life. Ride A Bike! and many other blogs.

Apart from that there are of course also a lot of photographers I like that occasionally take pictures of bicycles and cyclists. As I recently saw a documentary about her, I want to mention Annie Leibovitz's great picture of a bicycle in Sarajevo that she took during the war in the 90ies. Quite expressive and sad.

Actually Annie Leibovitz is well-known for her work for the Rolling Stone magazine and Vanity Fair. She takes outstanding and impressive portraits (famous are pictures from a Rolling Stones Tour, John Lennon and Yoko Ono, the pregnant Demi Moore, Whoopi Goldberg in a bath of milk and many more). 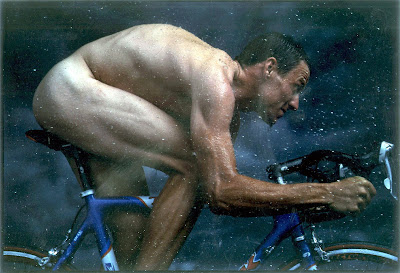 What a powerful photo. Annie Leibovitz is so talented. Victoria Pendleton did a photo shoot emulating Lance's, but with a different photographer.

Annie is so amazing. She just always seems to get it exactly right.
I was riding around, today shooting, and telling a friend how I don't think of my cruiser bike as a bike, anymore- it has become a photography tool! The coaster brakes mean I can shoot while slowing down without a problem. I think it may be a sickness at this point : )

The Sarajevo picture is enough to make you weep - it really makes you feel the waste of it all doesn't it?

Nice blog. Keep on good work. Hope you add me, too.
My blog is about environmental education, called BioTerra, open since 2004 (!). Many languages available. The link is http://bioterra.blogspot.com
Best regards

I posted some tips on how I shoot cycling on vigorotaku.blogspot.com

I hope that you find this helpful.