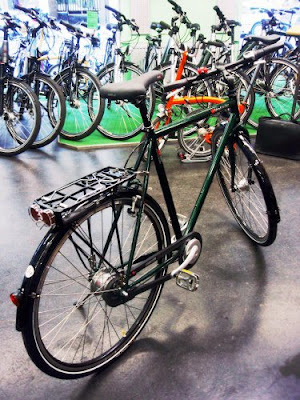 A few months back Maff's old city bike broke down because an ownerless dog ran into his back wheel when he was cycling along the Danube bike path. Although he would have liked to have a new bike immediately, he decided to pick a more substantial and well- equipped bike this time. He choose the Fahrradmanufaktur T-300 in emerald green. Fahrradmanufaktur is a fancy bike producer from Germany. I haven't heard much about them beforehand, but they seem to build a lot of high quality city bikes and I can see more and more of their bikes on the road these days.

I don't know all the details, but the T-300 has an 8-speed gear hub (Shimano Nexus), a hub dynamo (which can be used in on/off/auto mode) and hydraulic caliper brakes. It comes with all essential accessories like fenders, carrier, chain guard, bell and even a small bicycle pump. It doesn't need reflectors on the spokes as there are built-in reflector bands on the tires (which nowadays is almost standard). If I'm not mistaken Maff only paid 700€ for this marvelous bike!

Unfortunately, at the Cooperative Fahrrad in Vienna and even at the Fahrradmanufaktur, they didn't have that bike in his size ready, so he had to use his cyclocross (a Kona "Jake the Snake", in emerald green too) in the meantime.

Well, but patience pays off! Look at that catch!

Maff and the Fahrradmanufaktur T-300 on the way back to Linz (by bike and by train)
By the way, the people at the Cooperative Fahrrad are very competent and have almost everything a cyclist can possibly want (including folding bikes, tandems and even penny-farthing bikes!). What I also like is that the young sales clerk keeps telling me that I have a cool bag. I guess I should introduce you to my messenger bag some time in the future, too ;-).
Posted by anna at 6:08 PM

Awesome! Congrats to him on the new ride.