I have some relatives in East Tyrol (Osttirol, in German) that I visited for a few days. East Tyrol in the very south of Austria, bordering Italy. To the capital Lienz one can get in a reasonable time from Vienna, but in the rest of East Tyrol it's basically impossible to move around without a car. Well, there is a regional train operating between Lienz and San Candido (in Italy, called Innichen in German), but it's very slow and only connects a few towns. Due to bicycle tourism it runs more often in the summer and it's also fairly easy to bring along bikes. On the other hand, there are no more buses (except school buses), not even taxis, in most of the rural areas although the population is constantly growing.

My grandma is lucky because she can still walk to the town center on her own and has my cousin looking after her, but for most of the old and young people in East Tyrol living there means heavily depending on people that are entitled and capable to drive a car. Must be very depressing to feel so locked in. My grandma only realized that when my granddad died, who used to drive her around.

Most families own more than one car. The scenery is nice, but they pay a high price for living in houses far away from centers. Strange enough there are also many who choose to live so car-dependent: many build their houses further and further away from basic infrastructure (such that they can't even get a liter of milk without getting in the car) and accept long commutes to work. Bicycles are rarely used on a day-to-day basis. 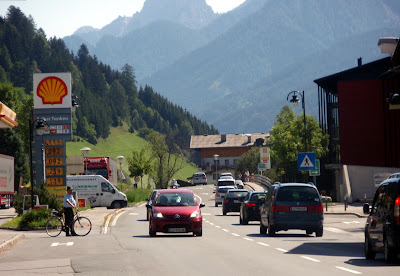 Cyclist waiting to cross the main road through East Tyrol. Did he go shopping at the petrol station?