On my latest post we arrived at Korppoo on Monday night. It is a small town that has less than 1000 year-round inhabitants but a lot more in the summer. For Tuesday, we had only 30 kilometers’ ride left, which was substantially less than the 150 kilometers we had travelled that day.

So, in Korppoo we stayed at an inn called Röda huset (The Red House). In the morning, when I was walking in the garden of the inn, I found this. 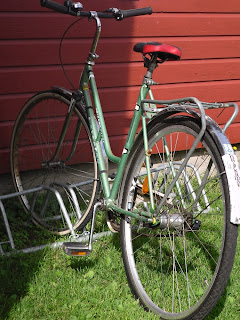 What is missing there? Can you see it? The bike is not locked, in fact, there’s no lock at all. When we were heading out on the road again later in the morning in front of the local grocery store this sight was repeated: there were five unlocked bikes in the bike racks at the store. People don’t seem to lock their bikes in Korppoo. Do you have any theories about this that you would like to share? People do lock their bikes generally in Finland, and there’s a lot of traffic and tourists in the archipelago, which is otherwise sparsely populated and mainly rural.
The weather on Tuesday was sunny and warm, and we were in no hurry to reach a ferry. The road was interesting too, so we pedaled of a good pace and enjoyed the ride. Soon it was time to take the last rope ferry and return to the island of Nauvo, which is where we started the whole journey.
So, the ride of the day took only a couple of hours, and we arrived at Nauvo well in time. We went to the beach which is located right next to the guest port and sunbathed a bit. I took the first swim of the year (in August, well in time) and had tiny little fish bite my toes.

It was quite sad to return the bikes to the Västergård and leave the holiday behind, but still, one’s own bed is the best one.

BTW, there is something important that I need to tell you about the archipelago just in case that anyone goes there. There are ticks in the archipelago, and they can be dangerous because they spread diseases. One disease is lyme borreliosis, which can lead to paralysis but can easily be treated by antibiotics in the early phase. The other disease they spread is brain inflammation which can lead to coma or death. So, if you ever go to the archipelago, take measures to prevent tick bites and check for bites every night. You don’t want to be hospitalized for life just over a stupid tick bite.

Thanks for sharing your cycling holiday adventures Sonja, I've really enjoyed doing a bit of armchair travelling via yours posts. You can keep the ticks though - yuk!

I think we have the same ticks in certain regions of Canada in summer.

You should write more about cycling in finland...it is one country that Canadians don't read much in North American news.

Very nice report, I have to cycle the Archipelago trail next summer. I visited seili and Houtskär this summer it was really nice. I also seen many cyclists riding the trail this summer, and it was a very wet summer, I felt so sorry for them.

I have read your article, it is very informative and helpful for me.I admire the valuable information you offer in your articles. Thanks for posting it..
hotels frankfurt oder