On the last post I told you about the first day's morning. So, we were traveling by the bad luck ship Linta, and that's where we'll continue today.
Linta makes a stop at the Island of Seili before it continues to its destination to Hanka port. Susanna was eager to see the island, so we took a couple of hours stop there. I have been on Seili before: it has been the location of a marine research center of my university since the 60's. I was there once for a field course, so I knew my way around. The island has a controversial history as an island of no return and for its booze-colored history. There has been people living and agricultural activity since the 1500's, and in the 1600's it became a hospital island for the leprosy patients. Basically, if you went in, you never got out again. In Seili the patients made moonshine to get some extra income, for the living conditions weren't exactly comparable to modern hospitals. In 1785 the last leprosy patient on the island died of old age (!). In the same year an asylum was founded on the island, and in 1889 it became an asylum for women only. That's why the grave yard of the island has only tombstones with women's names on them. The asylum functioned until the 60's when the island became a university island.
When we arrived at this infamous island, at first we went to see the wooden church. There we payed for a guide to tell us about Seili and the church, and it definitely was worth every cent. She told us about the ill and the crazy, and also about the geological history of the island. You see, the whole archipelago is slowly rising up from the sea. Actually, Seili used to be a group of islands, and in the leprosy hospital days the church point used to be an island where the patients were living separate from the mainland. The contemporary church was built in 1733. The strange feature in almost all of the archipelago churches is that they have models of ships hanging from the ceiling.

After the guiding me and my sister Susanna decided to go explore Kirkkoniemi (the church point) that has an amazing but unknown natural lookout. Take a look:

Nowadays Seili has only one or two all-year inhabitants, and about a dozen summer inhabitants and researchers, so its quite peaceful there, despite of the occasional tourist groups. Actually, a couple of weeks back the Russian president Medvedev and the Finnish president Halonen took a trip together to Seili, so it definitely is a destination good enough for some fancier people too.

After a couple of hours exploring, we took the next ferry to the Hanka port. There we stepped on our bikes and took off to the ride of the day towards our overnight at Merimasku. Rymättylä was a very challenging piece of journey because the island has lots of huge hills. I have to say that I found it pretty rough but my sister did better because she is bigger and stronger than me. This was the most difficult day when it comes to riding bikes, about 25—30 km of conquering big hills.
In the end of the ride the friendly hosts were expecting us with a room prepared in a house at the farm Taattinen. Now, this was not the room that we had booked, and there had been some problems with the reservation too. However, we got a hot shower, hot meal and lots of mosquito bites. Despite of a few shortcomings, the farm was a very nice place to stay overnight. There was a bar downstairs in the main house, above which there was a restaurant and on top of the whole thing a room for weddings and stuff. In fact, there was a wedding reception while we arrived, and the bride was just about to be stolen. In the night, when we had some time to explore, we found a horse, sheep, a tiny little lamb, and lots of cats and dogs to make friends with. The farm animals were free to wander in the yard as they wished, and all of them were very friendly and enjoyed petting. There were also variety of different types of swings, a pool, and a trampoline. That place must be like an amusement park for kids, and I have to say, being adult, that I also enjoyed it quite a bit. BTW, the farm has bikes that visitors can borrow.
My next post will be about the second day.
Links:
Day 1 (morning)
Day 2
Day 3
Day 4 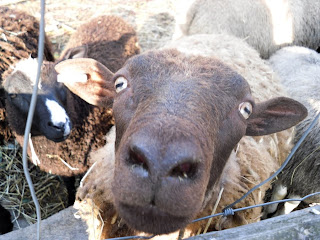 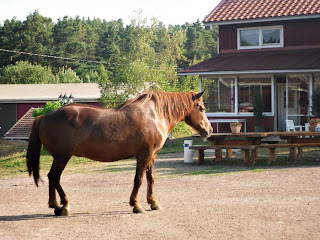 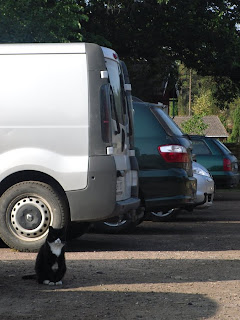 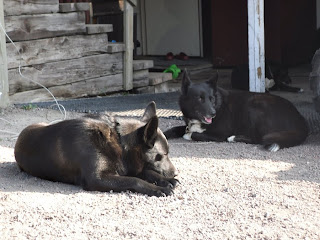 It's very exciting to read about your trip! Funny that they have ships in the church. I wonder why that is.

Very interesting. Thanks for the great pics and the write-up.

Travel Diary is so much fun to read. Through reading a travel diary like this you can feel that you are also travelling. Thank you for sharing your experiences. I can't wait for the second part.