Florence-Tortosa: a trip on a bike prototype

Two weekends ago I was in the wonderful Renaissance fair of Tortosa. During the 16th century, this city in the South of Catalonia was a flourishing city as it was located in a strategic place in the Aragonese crown, just on the way of the three important cities at the time: Barcelona, Valencia and Zaragoza.

During this Renaissance fair, many activities related to this time are held. One of these activities is always an open air exhibition about some topic related to Medieval and Renaissance times. This year it was related to Leonardo's prototypes and surely, there was this: 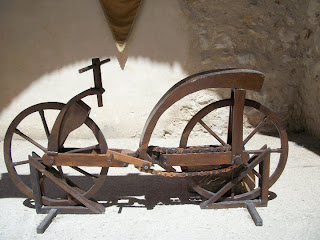 It made me think about Anna and the apron I brought her from Florence and I thought I had to definitely take a picture of it :).

Next to this wonderful prototype there was this explanation: 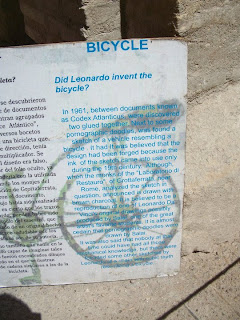 After reading this text and the specialized article, The Leonardo da Vinci Bicycle Hoax, Anna mentioned I don't know what to think about the sketch that originated the prototype. Is it really a forgery? To the general audience it doesn't, as the divulgative text next to the prototype I saw shows, but specialists doubt. What to think then? Go with the flow or be skeptical? Be genuine or a forgery, both cases may have its merit. If it is by Leonardo, we will reaffirm our belief that the man was a genius; if it is a forgery, we may praise the forger for his/her cunning thoughts, because we all have believed the sketch to be genuine.
Posted by Anna at 10:00 AM

I would focus on the chain. Chains as used on bicycles were developed centuries after Leonardo; the only ones he may have known are those with elliptical links, and then only in very primitive form. Not that this means much. Leonardo has made many sketches of mechanical contraptions which were never actually built but became feasible only after technical knowledge had advanced.

Yeah, hard to find out the truth without knowing all the facts. But no matter what, the bicycle is a great invention :-).