Bikes of my life

My first bike was a little and blue. I think I was around 5 years old then. I was very fond of it. I don't remember much of that time, but there's one memory concerning that bike. The memory is vague, I'm not even sure whether the bike was actually mine or my twin sister's. Anyway, we were living in Eskilstuna, Sweden, in a suburban block of flats in a Finnish district. There were some kids that often bullied us and other girls on the block. The bad boys, as we called them, stole that bike, and I was very upset. I can't remember if we got the bike back or not.

When we moved back to Finland, getting new bike took a while. Most of my life we lived in rather small communities and suburbs that had schools, so there was no need for any other transportation besides your feet. One of my home towns was Outokumpu, a town of less than 10'000 people. The school was 2 kilometers from my home, so I walked. My mother was unemployed and single, we couldn't afford bikes anyway. However, some of my friends had bikes, and I often bummed rides on their rack. In the wintertime we sometimes walked, sometimes skied, but my all-time favorite was the kicksled! We had two of them and the downhill on the way back home was so much fun in a clear winter afternoon. You stand on the skids and kick, and you can give a ride to a friend in the chair. I would still love to use one, but road maintenance is usually too thorough in big cities. However, this winter has been so snowy, that kicksled would be more practical than bike. Imagine parking a kicksled next to the bike racks at the university :D 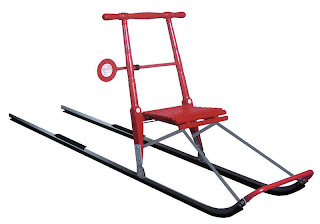 A kicksled, or a kicker. Much more fun than walking!

So, I was bikeless for around 15 years. I think I was around 20 when I finally bought one. I needed it in order to get to work and because I was sick of the public transit. The bike was an 80s Finnish blue Helkama that was practically dug out of its grave. I bought it used, and it was just as crappy as one could expect of a bike that cost 60 euros. Brakes and gears didn't work properly. Once, when I was riding to work, the chains came loose and I had to ask the factory night mechanic to fix it in order to get back home.

A couple of weeks after that I finally went to Biltema, and bought a sleek black ladies bike with 200-300 euros. It was nice, reliable, and pretty one-geared bike and I was happy to ride it for 2 months until it got stolen in front of a police station. Obviously it wasn't insured and I couldn't afford to buy a new one, so I had to go bikeless again.

The next winter I went to university and got a new job at a flee market. About a year after the theft I saw a beautiful red Titania bike at the flee market. It was love at first sight! So, I called the client and asked for a test ride. The bike felt good, but had a lazy rear brake. I negotiated the prize a bit lower to about 60 euros and that night I was happy to ride my new bike home instead of a bus :) 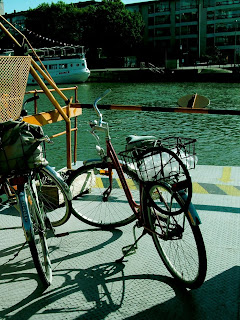 This is my classic urban ladies bike, Titania Terässiipi.

I still ride the same bike. I've spiced her up a bit, and she's still the only one I've got and the only one I need. She's my good old urban steel princess; the best, prettiest and most reliable city bike on the block.

I'm a bit confused about what biking infrastructure in California has to do with Sonja's post in any way, shape, or form. Personally, I probably ride FAR more than Sarah and, well, I don't want to get ugly...

That being said, I'd like to hear more about the Titania bike, a maker with which I'm unfamiliar. I hope it is safe to presume that, since the purchase, the "lazy rear brake" has been dealt with and I'd LOVE to see some closer up photos. I have a BUNCH of other questions, such as what the circular thing is that seems involved with the rear basket, but I'll patiently wait to hear more.

I wish I still had my bike from high school.

This winter old kickleds has been seen again on the streets i Sweden, first real winter in a long time...

The first time I saw one of those kick sleds was when the Olympics were in Norway and an elderly women was getting around on one. It stood out, because most people here don't spend much time outside in the winter, especially on non-motorized forms of transport, unless it's for fun or exercise. My thought was the old ways didn't make it over here. We have skyways downtown, so people don't have to go outside at all. Wimps!

Very interesting stories. One of your bikes got stolen beside a police station. Wow, that's really bad!
That kicksled looks so cool, would love to try it!

@ Steve: I promise to write a full presentation of the bike and manufacturer. It's a small (but old) Finnish company, so no wonder if it is unfamiliar. And of course the rear brake was fixed :) I have some new images of the bike too, but in the mean time, here's a collague of images http://cyclingisgoodforyou.blogspot.com/2009/12/winter-cycling.html