All the crap they sell...

Last August a young man got killed in Salo (40 km from Turku) because of a crappy front fork. He was cycling to work, and the fork gave in. His head hit the pavement and he died. The fork was like this: 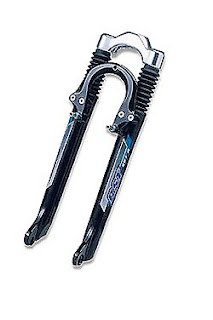 The springs had rusted through, and inner pipe slid out of the outer pipe. The poor boy's bike was a Nishiki Reno 26, but these dangerous forks can be found in many other bikes too. Apparently there are thousands of these alone in Finland. The manufacturer is Taiwanese Dah Ken and the model was RST 281R. (source hs.fi). There's an unverified hearsay that the poor guy had just taken the bike to a professional maintenance.

The road traffic safety department in Finland is considering of pulling these forks out of markets. Guys, be aware of what you buy! Of course we tend to think that products on the market are safe, but sometimes not all aspects can be thought of by the authorities.

My solution to keep the risks and costs down is to buy things that have few moving parts and therefore don't brake easily. It's stupid, but I don't even have a vacuum cleaner (I've had some bad luck with them). In stead I use wipes. The same goes with bikes too, although they are not exactly space technology. My bike is single-geared and has fixed front fork. Nothing moves that doesn't absolutely have to.

Anyways, if you have similar fork to the one in the picture, check its condition!

Intrigued to know more about your 'bad luck' with vacuum cleaners, if it's not too embarrassing.

I'm with you, the simpler the better. Thanks for the heads up.
I like your blog, it's on my reader.
Jon C.

I am with you too. For my bikes I stick to the well-tested basics and avoid the new-fangled and potentially dangerous rubbish they put on the market.

I tend to stick to using Steel Bikes,they are more reliable. I do not like Carbon,if I was getting a Road Bike I would get a Steel one if I could. For awhile I had a Cheapish Hardtail Hybrid with a Suspension Front Fork and always had trouble with the Gears slipping. I used this for Commuting for a Year then got Rid of it. I have a Steel Dutch Bike which I use most of the time and also an Aluminum Trek 7.3.

Always try to get a good Quality Bike and dont get a Cheapy Supermarket type Bike. Be prepared to spend that little bit extra at a Quality Bike Shop that you know is reliable.

@ l'homme au velo: My all bikes have been steel bikes. They are good and sturdy. I mind the heavyness only when lifting the bike in bike demonstrations :). And there's also another way of getting quality stuff if you don't have the extra money to spend. You can get some really good quality bikes with a less than hundred Euros if you're willing to buy used. I hear that police auctions are a treasure house too. The good thing about old bikes is that they were made to last, unlike anything they make today. You see, it's all about consumption, you need to buy new stuff all the time to keep the economy growing. My bike is that of old generation, and I hope to use her the rest of my life, or at least until thieves finally get her too.

I am not sure how possible it is for the average cyclist to check the condition of such a fork. I stay away from these as a rule.

eToro is the #1 forex broker for newbie and pro traders.