Last Saturday anna wrote about the image of cycling in Austrian media. Today I'm writing about the same subject in Finland.

I reviewed about 30 articles that were published on January 2010 on 5 newspapers' websites. Cycling was by far the best represented in the newspaper Helsingin Sanomat, which had a half of the articles.

Many of the stories were about accidents and sports. I couldn't be bothered with the sports stories, but there were a few stories of cyclists being hit by cars. Anna mentioned that there are more and more cyclists being killed and injured in the traffic accidents these days in Austria. Well, I don't know about the how it is in Finland altogether, but Turku the numbers have gone down as the cycling infrastructure has improved. I don't think that the cyclists are blamed for the accidents even implicitly.

The rest of the articles were about varying subjects. There were a couple of articles about bike thefts. One theft story was a funny thing from Denmark: a thief had stolen a bike, but he didn't notice that there were 3 kids on the back of the 3-wheeled bike, and so he stole the kids too :) Fortunately he was a good-hearted thief and took the kids back home following the eldest one's instructions.

There were also a couple of articles related to the health benefits of utility cycling, and an article that appealed to the motorists to consider cyclists while driving. All 3 of the cycling accidents on the news were caused by irresponsible motorists, so this plead was not made for no reason.

One article was about cycling infrastructure in Joensuu, eastern Finland. The writer was 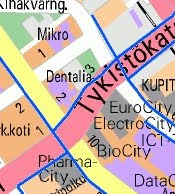 pleased with the city infrastructure, but hoped that bike lanes were better maintained in the wintertime and that people wouldn't cycle on the sidewalks. Riding on the sidewalks is a common problem in Finland. You are not supposed to do that, but sometimes you've got no choice. For example, there is a busy road (uncrossable without traffic lights) on the way to the supermarket where I do my shopping. For about a 50 meters, the bike lane just disappears on that side of the road (see the pic). It seems unreasonable to take the long way round and wait and cross roads to get back to the place where the lane starts again. Besides, all the bike racks and university buildings are positioned on that side of the road that has no bike lane. A bit stupid, eh? Solutions like that are driving us on the sidewalks. Also, in the winter it is very dangerous to ride on carved icy car tracks among cars. If you are not willing to risk your neck, you sometimes have to choose the illegal sidewalk.

There were also a couple of really nice pieces of news. One of them was an article about a man, who is cycling all the way from Finland to Greece. Other one was a webportage about pimping bikes. It seems to be in fashion nowadays. I've seen some fancy paintwork like zebra bike and a flower bikes in the neighborhood.

However, the piece of news which made me really happy, was the one about proposed changes in the traffic law :D A working group is pondering on the issue of cycling on sidewalks and they also hope to make cycling otherwise as convenient as possible. You see, promoting cycling is a part of many local and sectoral Agenda21 plans (e.g. Turku plan) in Finland, and it is also an essential part of the national sustainable development strategy. Here's some of the things that the working group had thought of:

To compare the image of cycling in Finnish media with the Austrian one, it seems that the image in Finland is much more positive than the image in Austria. It is recognized that cycling among cars can sometimes be dangerous and that it is not the cyclist's fault. There were also some positive articles on cycling infrastructure and legislation. The nation and municipalities are clearly trying to improve the situation of cyclists in the traffic. Also, the press, especially Helsingin Sanomat, brings forward the health benefits of cycling, and also the fun part of it. I'd like to think that the press reports about cycling in a positive way in part because Finnish media is supporting the national sustainability strategy.

Regarding the bike pocket: It is not there for the #really fast# bikers. The main purpose is that the bikers are visible for the cars, particularly those that are turning right. So you should use it, even when you only have one gear. Once the light turns green, you should get out to the right hand lane again - but now you know that you have been seen by the drivers behind you.
In Norway we have for years had laws that allow us to cycle on the sidewalk. Many cyclist disapprove of this legislation. We believe that by allowing the cyclists to ride on the sidewalks, the authorities have been able to get away with not giving the ample priority on the need for establishing separate cycle infrastructure. Most biking infrastructure in Norway are joint "Walking and Cycling roads", which are more usable for walking than for cycling. Hence, many cyclist ride together with the cars, which is not very popular among the cardrivers.

@ Steinid: Bike pockets are useless, if you are riding on the bike lane :) Although, the bike lane network is far from perfect, and you just have to venture the car lanes sometimes. I'm also a bit suspicious about allowing cycling on sidewalks. If it did not reduce the efforts of building true bike lanes, it would allow more flexibility for cycling. But if they expect cyclists to primarily use sidewalks with the pedestrians, it would suck seriously. There's enough trouble already with the combo-lanes. Further away from the city center, where there is few pedestrians, using primarily sidewalks wouldn't be that bad. But still, that Norwegian system seems far from ideal to me, although it is a lot better than in most countries.

Very interesting. This category breakdown is actually very similar to the type of breakdown you would find in US media.