How to not get stuck in traffic jams

I might state the obvious but: walk or ride a bicycle. The first is actually pretty fast in the rush hour, but riding a bicycle of course is faster for long distances. Public transport is only good if it is separated from the rest of the traffic and therefore doesn't get stuck in the middle of cars, for example subways and trams or buses with their own lanes. 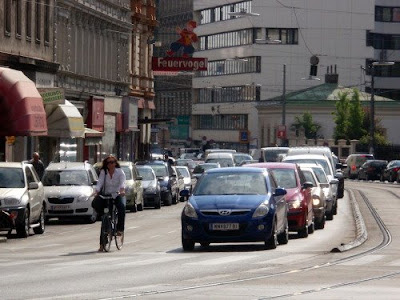 A stylish and fast cyclist on the Alserbachstraße, surrounded by a lot of metal

In Austria, single-track vehicles, i.e. bicycles, mopeds and motorbikes, are allowed to drive past non-moving vehicles wherever they want to, in particular on the right at red lights. That's already quite useful although of course usually not that fast as there is not so much room for so-called undertaking. I use it a lot in the mornings on a certain narrow one-way street where I otherwise would have to wait at least 10 minutes behind someone's exhaust. Well, motorists like to do that -- I don't.

What's it like in your country? Do you have a similar law for undertaking? Actually in Austria this law is “new” (apparently it's allowed for motorbikes since 1997 and for bicycles since 1989) and some people behind steering wheels don't know it and try to block cyclists. It just tend to shout “StVO §12 Abs. 5” then (that's the very passage in our traffic regulations). Of course one has to choose a speed that is according to the available space in order not to damage anything. Sometimes the gaps are so small that I have to stop and lift my handle bar to get past side mirrors. But in fact I enjoy it a lot and it's very efficient too.

Even more useful and also more convenient to bypass traffic jams are bike lanes on the road or segregated bike paths. Well, in Vienna we more or less only have so-called “multiple use lanes” which can also be used by trucks if they are too wide. Such bike lanes are handy, at least when they are not dangerously constructed too narrow beside parking lanes. There are also a few such bike lanes between two car lanes. Although one cycles is in the middle of moving cars it is far less dangerous than cycling beside parked cars and also allows to turn in both directions easily. Anyhow, that's what I can tell from my own experience, but see for yourself. The pictures in this post show such a bike lane on the Alserbachstraße in Vienna. 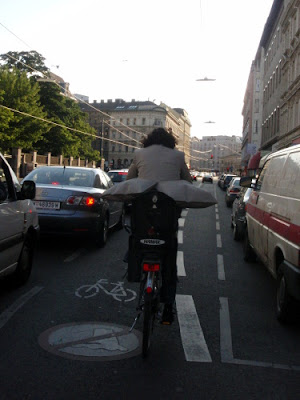 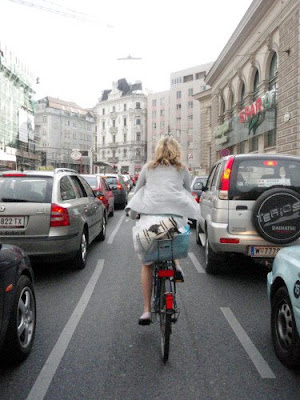 I was stuck on Bus 13A today for 20 minutes, stuffed firmly between a very voluptuous matron and a grinning man who had clearly eaten onions for lunch. Viva single track vehicles!

Hi Anna in Dublin by Law we cannot go through a Red Light or Turn Right at Red even though no Traffic passing on the Other Road although many do so and go through anyway. Cyclists want the Law changed so we can do it Legally also Cycling up a one way Street against the Traffic on a Cycle Lane. We do not have Cycle Lanes in the middle of Two Traffic Lanes. Traffic can Drive through the Cycle Lane to Park on the Left. You can be Doored by Passengers getting out of Cars as the Cars are Parked to our Left of the Cycle Path and you have to keep well out to the right on the Cycle Lane to avoid them, this is putting you in Danger of being Hit by passing Motorists.

It is especially Dangerous in the City Centre at Rush Hour, O 'Connell Street, Westmoreland Street,Dolier Street, Dame Street, Amiens Street, These are possibly the Worst Streets but there are others all over the City.

@ le homme au velo: Unfortunately cyclists are still not allowed to ignore the red light when turning right, but at least we don't have to queue and can line up in the front.
Allowing cycling against one-way streets is very efficient, I agree. Luckily we already have a few of them.

I always pass on the right when traffic is backed up and usually have a bike lane that allows me to do so without obstruction (unless there's a cab or truck in my lane). Waiting in traffic is for the silly people who chose their transportation modes poorly.

I think these bike lanes between car lanes are too dangerous. There are a lot of blind spots and you probably don't get enough safety clearance from everyone.

We have a 2 way bike lane in the middle of a very busy street(Hennepin Ave) in downtown. On one side there is one way car traffic. On the other side it's a cab, cop, bus lane. I use it a lot and know what to watch out for, but this weekend, when it rained, it became very dangerous. Cars have a tough time seeing the lane markings when they are wet and I almost got hit by one car who was mistakenly turning into the bus lane. Thankfully, my WTF! made him aware of my presence.

On normal days, you always have to watch out for cars taking a left turn right across your path. I've heard rumors that they are going to turn this street back into a two way street, with hopefull a better bike lane.