This year has been snowy and cold everywhere in Europe. I've heard news of snow in Spain and Italy, and Austria received first snow before Turku, Finland. Actually, we don't always get a good snowy and cold winter here either. A couple of years ago there was no termic winter (temperature drops permanently below zero) here at all, but that was exceptional. I have never experienced such a poor winter before, and it really sucked. However, this year has been delightfully snowy and cold, we received permanent snow cover a few weeks back, earlier than usually (I have to mention that in Turku the statistical average for that is in the Christmas Eve :D). So, considering my little winter cycling experiment, the conditions have been ideal. Apart from the raging blizzard outside as I'm writing this. 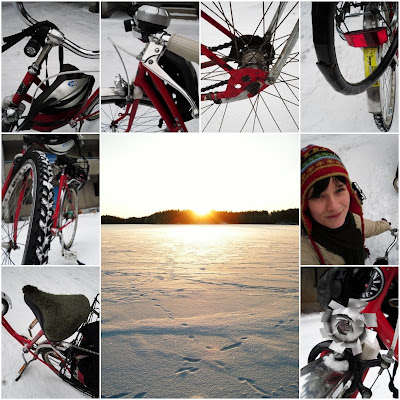 In the middle: walking on frozen Kallavesi lake, Kuopio; other images: modifications for the winter
I fixed my bike up a bit for the winter. Anna gave a year ago some hints for winter cycling. As she recommended, I did get a new stronger and flashing light for the bike. In the city there is usually enough light for cycling, especially in the snowy winter, even in the night. However, here riding a bike without a headlight is illegal, and the light makes you easier to notice. I installed a detachable head light because batteries tend to die and circuits sometimes brake when it gets cold enough. Anna also recommended that one should check their brakes for the winter. There was actually a broken piece in my bike's brakes, so I had to find a spare part at the bike kitchen and ask the boys to fix it. The hand brakes I tightened by myself.

I changed a nice soft and warm seat cover on the seat (that has been stabbed by some vandals). You would be surprised how nice it feels under the bum in the cold weather. No worries about urinary tract infections :). I also made a little winter flower from old candle cups and put it in the place of the old head light. Winter also surprized me by braking the plastic cover from my extra lock. It was very stiff and just cracked open one day... I need to get a new lock anyway, because someone tried to steal the bike and broke parts of the lock in the process. The lock served well, but it may not hold another attempt. Another thing about winter and locks: sometimes locks freeze. So lock-antifreeze would be useful.

The most important and expensive winter investment was the studded tires. Anna does not think that they are necessary in Austria, but I recommend getting them if you have long, snowy winters like in Finland. I got Nokia Hakkapeliitta tires. They are the most expensive winter tires, and also the only decent studded tires I could find. There is a store chain called Biltema, that sells cheap foreign winter tires, but everyone kept telling me not to try my luck with them. They said that they will last for a few months, if you're lucky, but Nokia studded tires last for years. It's about the studs: they need to be hard enough and well designed to take the abrasion. My tires have 2 metals in the studs, in the middle hard one, and around it a bit softer. This design should last some serious use. In addition, the tires have good profile. So, I listened to the bike mechanics and just got the good tires, despite of the horrible price (70€ for 2). If you have experiences on different studded tires, I'd like to hear about them. 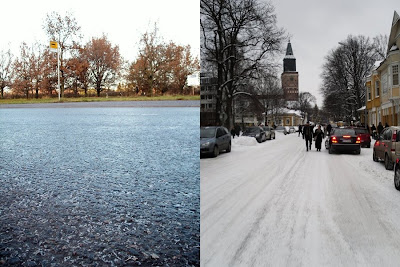 Fun road conditions: black ice on the left and hard-packed snow on the right
So I've been riding on the new tires for a couple of weeks now. The old tires are very slippery when there's black ice or packed snow on the road. With them, when there's loose snow on ice or snow, I would not even consider getting on bike. However, when the temperature gets below -10'C, they are perfectly useful. But, between -0'C and -10'C, my normal tires behave in an unpredictable manner and I loose control of the bike frequently. Studded tires give much better grip on packed snow or ice, and make the bike easier to control on loose snow. You see, loose snow under tires feels like sand; it is not easy to manage, especially with narrow tires that are otherwise better in urban environment. However, studded tires are very heavy under the bike. I brake sweat much easier now, which exposes one to catch a flu in the cold. Also, one should change back the ordinary tires as soon as possible after the road conditions get tolarable in the spring, because contact with exposed pavement will wear down the studs quicky.

To wind up, I'd like to say, that winter cycling is lotsa fun in varying conditions. It takes a bit time to get used to, a good physical condition, lotsa layering and a good attitude. One has to be extra careful in the traffic in the winter. I would recommend getting studded tires if you have icy/snowy road conditions throughout the winter. On the positive side, winter cycling keeps you fit and the fresh air keeps you on good mood. I gladly skip the daily bus trips that I find annoying, timestaking, and uncomfortable. Besides, I don't have to keep buying expensive bus tickets now. The 70€ investment on tires pays itself back in less than 2 months in saved bus expenses. That's it then, happy holidays for everyone!
Posted by Sonja at 7:07 AM

Nice post Sonja. You hit all the winter cycling equipment highlights. Judging from your pics, studded tires are a must. I do need to get a furry seat, because I'm feeling the need for more cushioning.

Turku looks a lot like Minnesota, which probably why we have so many people of Finnish ancestry(me included), here. And many sauna's!

You mentioned the dilemma of sweating too much, which ends up leaving you very cold afterwards. I have a few suggestions for avoiding this fate. Don't put on too much clothing. If I'm chilled outside, before I hop on my bike, I should be fine when I warm up on the ride. When I do start sweating, I start removing extra's. This will ventilate your body better. Another technique the keeps you from sweating too much is called stove piping. A stove pipe is a cyclinder that funnels generated heat up and out. Don't put a heavy hat on your head, or you'll feel the sweat rolling down. Head bands will keep the ears warm, but let heat out through the top of your head. Too avoid being somewhere with too little gear, I pack some extra's too.

Enjoy your rides in the new year!

Great post. I imagine studded tires are a must for cycling year-round in Finland! Do many people cycle in the winter where you live or are you lonely out there?

There was some snow in Austria before Christmas, but it didn't last. It's still cold though, but currently don't have problems with snow- or ice-covered roads. Doesn't happen very often, that I have to be really careful when cycling, but it's always good to be aware when the temperature drops... I'd love to try studded tires, but since I don't really need them there's no point in spending so much money (so far my MTB tires to a good job, and I got even new ones with a better profile). Very very few people use them here and I don't know any personally.

By the way, lovely seat cover you got. Makes me want to sit down :-). Super winter flower you made. Just makes your bike look so sweet.

I totally agree that winter cycling is a lot of fun. I like that it keeps me fit, and also that I can train my cycling skills in different conditions throughout the year. Fair-weather-cycling is too boring :).

That seat cover feels like kitten fur :) It's the little details that give your bike the extra "it"

@spiderleggreen: you are right about the clothing stuff. I need to be more careful with that. It is just that I cycle lotsa short distances, many times a day, and don't really bother to think about the clothing all the time. But, I need to make a headband, that would be practical and quick! And, Finland really is similar to the Lake Superior drainage. That, and the history forestry industry are the main reasons why there are so many Finns in that particular area. I have been to Minnesota, but never got a changce to visit Minneapolis :(

@Dottie: Many people put their bikes inside for the winter, but many keep riding. No-one looks twice a winter cyclist here (except for Asian tourists that take photos of us). Some people even choose not to use winter tires. But, since I'm all about safety and comfort, I use them.

I love the collage. I'm getting cold just looking at it.

Fur seat cover - very cool! Would love to see these in stores or online.

Raymond from VeloWeb here (thanks for the link!)

Interesting reading! I used to have a nice sheepskin saddle cover. Is that what you have?

The Hakkapeliittas are good tires indeed. They will last well due to the carbide studs.

Shameless plug: I have a detailed winter cycling page (linked to my name above). Comments and questions welcome.

As I just twittered, my mom had one of those fur seat covers on her "Ladies' Schwinn" back in the 70s. Always wanted one for my Schwinn Le Tour--until it got stolen. *sniff.

I have to correct you: the seat cover is NOT a sheepskin cover, it is some synthetic material. I'm phasing out of leather products. Hopefully some day I can became vegan... BTW, today I installed a new fixed front barket in the bike :D It is also synthetic (better in changing weather), but looks like willow basket.

Just bought one studded tire in Biltema, 29€! Hope you were wrong. : )