Is cycling in the winter dangerous?

Well, according to an Austrian newspaper, the Kurier, it is:

And not only that. They claim that people are very irresponsible if they cycle in the winter. It doesn't matter that there were a lot of accidents with cars because some people still drive with - at these conditions not allowed - summer tires. How irresponsible is this? And it also doesn't matter, that some bus lines couldn't operate for a few hours because of the (actually not so heavy) snowfall. But to be fair, they mentioned that in the article too – in the end. The main object of complaint where cyclists though (a minority throughout the year, in the winter probably even less than 1% of the modal split – why do they even care?).

They even spread some lies to put winter cyclists down. For example they mention that most cyclists aren't insured. That certainly is not true, and in particular not for people who cycle throughout the whole year and very well know where the dangers lie, how to cope with them but still are aware that accidents can always happen. Most cyclists actually are insured, either due to their general household insurance (who basically everybody has) or even by an additional bicycle insurance due to their membership at a (bicycle) lobby like Argus, IG Fahrrad, VCÖ, Arbö etc. 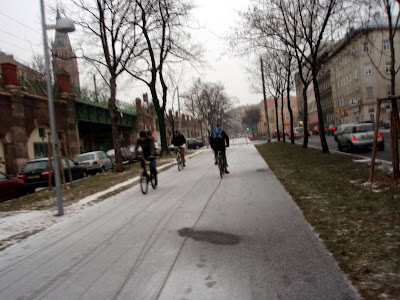 Are these cyclists dangerous?
They also say, that cyclists can't see very well if they wear caps. What about pedestrians and car drivers - don't they wear them too? And what about windshields? Isn't it true, that the wipers only clean a small part of it. I don't even want to start talking about side and back windows and steaming up.. Plus, most car drivers in Vienna don't shoulder check and also ignore cyclists at good weather conditions. But sure, it's the winter cyclists that are so very irresponsible. Although, there certainly might be some who don't care about appropriate speeds or equipment. But I don't worry about them, because they will find out soon, that this isn't the right approach to winter cycling – namely when they fall off their bike the first time. But who cares? The only person they might actually hurt are them. And I'm sure that they will remember it and be more careful in the future. I also had to learn that myself, cause nobody told me how to cycle in the winter safely. I will provide you some tips next time.

And maybe in the future I will also write about cyclists and other minorities – how easy it is to find a punching bag and why people believe and repeat what a few people claim to abdicate their own responsibility.
Posted by anna at 1:07 PM

It seems that there is a clear division between cycling in winter and cycling during the rest of the year. Here in Barcelona, there isn't this problem, because the road conditions are the same -usually in the city they don't get iced, it doesn't snow, temperatures very rarely are under 0ºC (or never-normally the coldest coldest is + 2ºC but so humid that it gets to your bones). And I didn't know about summer tyres for cars.

Are there may ciclying lanes in Vienna!

Your blog, as we say in Catalan, "em va com l'anell al dit" (it is for me "like a ring in my finger", or it suits me well as I'm just a beginner in the world of cycling and I can learn many things from you.

You know what...I'm already thinking how to get you a bike when you come to BCN (I think you cannot hire BiCinG for a short time without paying the whole year). :D:D:D

UPDATE: There are also positive articles about winter cycling in the news, like
"Radeln im Winter" by Christoph Chorherr in the Falter. And a tv report "Pedalritter im Winter" in "Wien heute" today (6th of February 2009, only available for a few days).